With the untimely passing of Total (TTE 3.62%) CEO Christophe de Margerie late last year in a plane crash, the company faces a lot of uncertainty. It's uncertainty that has only grown in the months since his passing due to the big drop in the oil price. This is putting a lot of pressure on Christophe de Margerie's successor Patrick Pouyanne as he has some really big shoes to fill. Not only does he need to navigate the French energy giant through one of the worst oil market downturns in years, but he must also deliver on the company's planned future growth. That will be tough to do as Total was one of the weakest players among the five big oil giants before the downturn began.

Starting out from the bottom
Prior to Christophe de Margerie's passing Total was at or near the bottom of the big five oil companies for all the metrics that matter. Its returns, as we can see on the chart below, were second from the bottom. 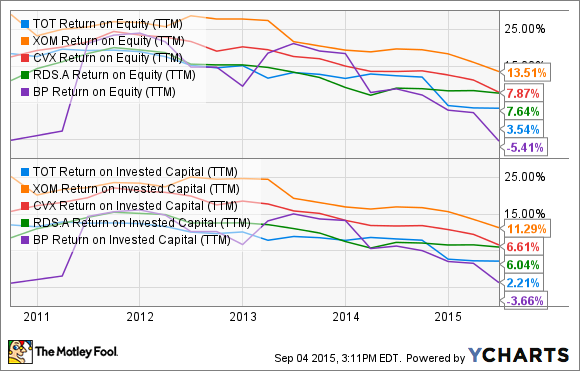 Meanwhile, it was a laggard in other key metrics as its upstream earnings per barrel were again second to last while its free cash flow has been the lowest among the peer group over the past four years. Even its balance sheet is closer to the bottom of the heap as its AA- credit rating is second to last while its leverage is the highest in the group. This was all largely before oil prices plunged.

Suffice it to say, the company has a lot of work ahead of it to catch up to its peers all while being without its fearless leader. That's a tough task as prior to his passing Christophe de Margerie was known to be a man that pushed boundaries. He wasn't afraid to become involved in more politically challenged areas such as Russia, nor was he unafraid to voice his displeasure of western sanctions that slowed down oil development. In fact, it was his risk taking that put Total in the position, prior to the downturn, to grow its production by 8% per year through 2017, which was twice as fast as its big oil rivals.

Swift action
In response to the oil market downturn, Total has taken a number of actions to reduce its expenses as well as boost its cash position. As the following slide notes, the company has put together a plan that has a cash impact value of $8 billion. 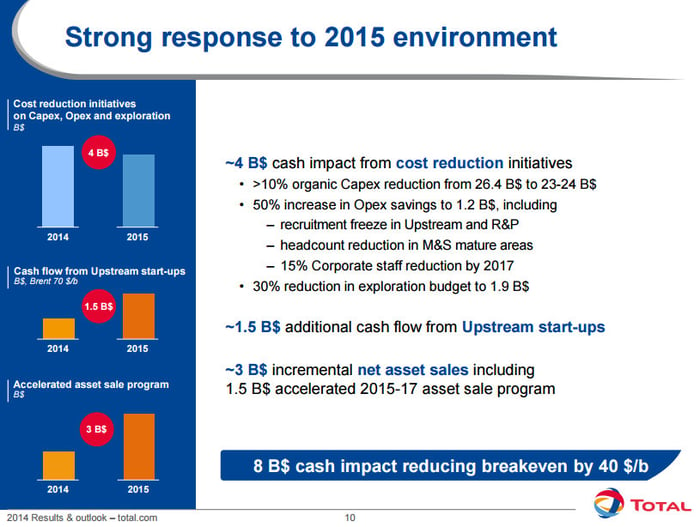 Further, the company has also instituted a scrip dividend program, which enables investors to switch from receiving cash dividends to being able to purchase the stock at a 10% discount to market levels. According to Total CFO Patrick de la Chevardiere shareholders love the idea as he said on the company's last conference call that, "The take up on the scrip dividend was 54%. So at this rate, we should reduce our cash dividend outlay by both $750 million per quarter, or $3 billion on an annual basis."

Because of these moves Total is in a position keep its balance sheet from weakening during the downturn. Further, it is also in a position to cover its capex and cash dividends by 2017 even if oil stays at $60 per barrel. This is because by the end of 2017 the company expects to have started up 15 major projects, which are expected to boost the company's cash flow by $10 billion per year.

Investor takeaway
Total lost its well-respected CEO Christophe de Margerie at what would seem to be the worst possible moment as it was right at the beginning of the oil market downturn. However, his team has picked up right where he left off and have quickly repositioned the company for weaker oil prices. They have shown that they are up to the task of leading Total not just in the wake of de Margerie's passing, but through the worst oil market downturn in years.