Please ensure Javascript is enabled for purposes of website accessibility
Log In Help Join The Motley Fool
Free Article Join Over 1 Million Premium Members And Get More In-Depth Stock Guidance and Research
By Daniel Sparks - Sep 9, 2015 at 9:23AM

A close look at Tesla's expectations for Model X reveal management's incredible optimism for the SUV.

For electric-car maker Tesla Motors (TSLA 6.36%), 2016 will be the year of Model X. With the first deliveries scheduled for the end of September, it's important for investors interested in Tesla stock to begin to evaluate just how big the company's bet on the fully electric SUV is. To clearly illustrate the emphasis Tesla is putting on the vehicle, consider these two charts.

Model X prototype. Tesla CEO (right) Elon Musk demonstrates the luggage that fits in the back of a Model X, even with a built-in third-row seat. Image source: Tesla Motors.

1. With Model X, Tesla wants to double sales.
"With the Model X, there's the potential to double Tesla's volume," Musk said in an interview with CNBC in July. To support his case, he cited the fact that global demand for SUVs and sedans is "about equal." So, with Tesla's foray into SUVs, he argues, Tesla will tap into a larger market capable of doubling the company's Model S sales.

Essentially, therefore, Tesla is betting it can deliver about 79,000 vehicles during the first four full quarters of Model X availability (from Q4 this year to the end of the Q3 next year).

If management's expectations for vehicle sales growth pan out, the growth could look something like this. 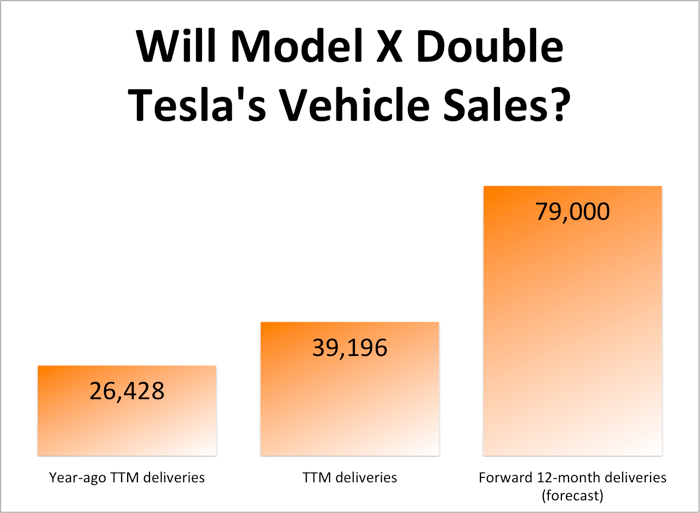 While a forecast for 79,000 vehicle deliveries is, indeed, about double Tesla's trailing-12-month sales, this figure can also be arrived at by piecing together other comments from management about expected quarterly sales. For instance, by adding Tesla's third-quarter outlook for 11,500 vehicle units shipped to its deliveries in the first half of the year, and then subtracting these total deliveries from Q1 through Q3 from Tesla's guidance for 2016 deliveries of 50,000 to 55,000, we can arrive at an estimate for about 16,000 total Model S and Model X deliveries combined in Q4. Looking forward to the first three quarters of 2016, it's possible to calculate quarterly estimates by assuming the company achieves the low end of its forecasted range to average about 1,600 to 1,800 weekly deliveries of Model S and Model X combined. This simple math puts Tesla's total deliveries over the next four full quarters of Model X availability at about 79,000.

2. Tesla is betting Model X will accelerate sales growth.
It's important to note the trajectory of Tesla's sales growth. Both actual growth in previous quarters and forecasted growth in upcoming quarters reflect accelerating year-over-year growth -- a testament to the company's aggressive execution paired with bold ambitions. 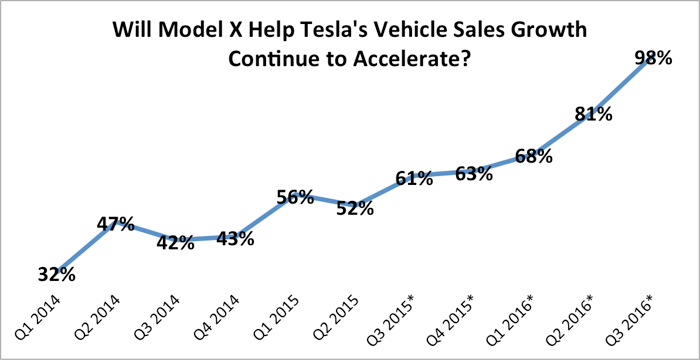 Data for periods without asterisks is retrieved from SEC filings for quarters shown. Data for quarters marked by asterisks represent sentiment and forecasts from Tesla management. Chart source: author.

While the actual year-over-year growth in Tesla's quarterly deliveries will undoubtedly be volatile, and likely very different from the rates outlined in this second chart, Tesla management has clearly communicated with shareholders that the company expects Model X will be a key driver behind another key growth phase in sales.

Some investors may point to potential cannibalization of Model S as a key argument against Model X helping Tesla's sales to double, but orders for Model is in the U.S. and Europe were up 30% and 50%, year over year, in the company's most recent quarter, respectively. This growth suggests there's still upside for Model S. And in Tesla's newer Asian markets, orders doubled sequentially in Q2, providing even more potential for further growth.

As Tesla rolls out Model X this year, investors should keep an eye on how the vehicle performs in the market, as well as look for evidence to support the company's bullish outlook for the SUV.