The company is struggling to grow amidst a pricing scandal and a curious case of overpriced asparagus water.

What: Shares of Whole Foods (WFM) slumped in August, falling by 10%, according to S&P Capital IQ data. Weak earnings reported at the very end of July, as well as some negative press, left a bad taste in investors' mouths.

So what: Whole Foods' fiscal third quarter was a disaster. Revenue and earnings missed analyst estimates, while comparable-store sales rose by just 2.2%. Management pointed to a pricing scandal in New York City, where stores were overcharging due to inaccurate labeling, as the main reason for the disappointing results. During the last two weeks of the quarter, comparable-store sales increased by just 0.4%, with national media attention driving customers away.

The stock slumped immediately following the company's earnings release, and it continued to fall throughout the month of August. In addition to the pricing scandal, one Whole Foods store, apparently due to miscommunication, put a bottle of water containing three asparagus stems on its shelves, priced at $5.99. This drew widespread mockery online, and reinforced the idea that Whole Foods' prices are extremely high, even though the company has been lowering its prices to better compete.

Now what: It seems that investors' sentiment toward Whole Foods has shifted dramatically over the past year. After the stock surged toward the end of last year, it's been falling since March, with a series of disappointing earnings reports and bad press accelerating the decline. 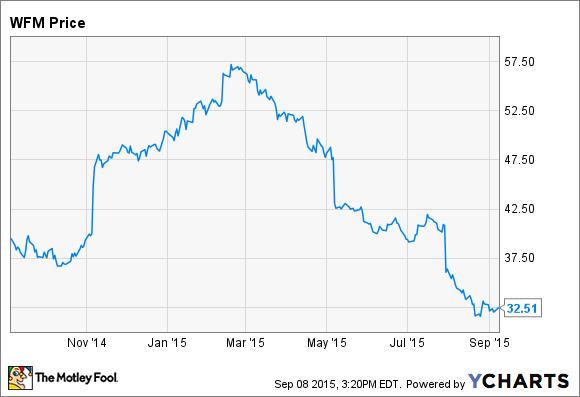 The NYC pricing flap may turn out to be a temporary issue, in which case the slump in the stock price may end up being corrected when the situation improves. But it's unclear how long it will take Whole Foods to recover from this incident, and it could negatively affect sales for the next few quarters. The worst-case scenario is that the company never fully recovers, and the image of Whole Foods shifts from an expensive grocery store to an expensive grocery store that also rips off its customers.

For now, investors have soured on the Whole Foods growth story. For those who still believe, the stock is the cheapest it's been in years.