Shares of the ad-tech company are down big despite a strong quarterly report. Here's why.

What: Investors in TubeMogul (TUBE) have endured an extraordinarily volatile year so far, with multiple massive moves both up and down following disparate analysts' comments and the company's strong second-quarter results. When all was said and done in August, however, TubeMogul stock had fallen 21.7%, according to S&P Capital IQ data.

After enjoying a slight rebound so far in September, shares of TubeMogul are still down around 27% year to date, underperforming the S&P 500's more modest 3.5% decline: 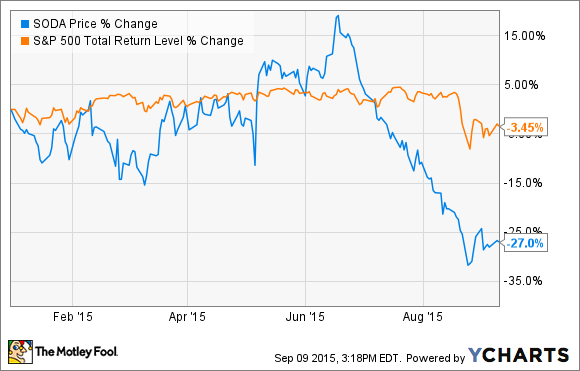 So what: TubeMogul started August on a rough note, with shares falling as much as 13% on August 10 -- the day before its earnings report -- after analysts at BMO Capital urged caution "due to changes in the competitive environment." More specifically, while BMO Capital admitted that TubeMogul was likely to beat quarterly expectations, the report expressed concerns over the entrance of up-and-coming competitors like Appnexus into the company's crucial video buying market.

Then, TubeMogul shares jumped as much as 25% the following day, after it revealed second-quarter revenue climbed 58% year over year to $45.4 million -- or roughly $6 million ahead of expectations -- a net loss of $0.04 per share, compared to estimates for a much wider per-share loss of $0.17.

Ironically, CEO Brett Wilson singled out TubeMogul's expansion into programmatic TV ads as a core contributor to its strength. And going forward, Wilson noted, "[W]e are excited to begin offering brand advertisers cross-screen planning and buying, with TV as the centerpiece of this effort."

Now what: It didn't help that the broader market pulled back hard in the ensuing weeks, dragging many fast-growing, yet-to-be-profitable businesses like TubeMogul down with it. To be fair, however, shares did pop more than 10% in a single day near the end of the month, after analysts at Oppenheimer suggested investors take advantage of the pullback.

If one thing is clear, it's that there is no shortage of opinions on the fate of TubeMogul and its competition. But at the risk of adding another, I think investors would be wise to focus first on the company's actual performance, which happens to be an encouraging exercise given its healthy growth and steady march toward sustained profitability. With TubeMogul still trading within reach of its 52-week-low, I think now's a great time for long-term investors to consider opening or adding to a position.