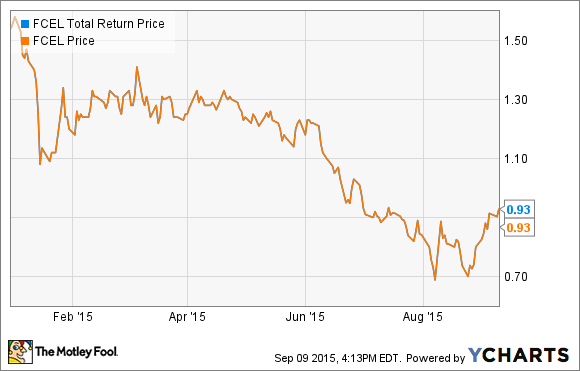 September has been kind to FuelCell Energy stock. The rest of the year -- not so much. FCEL Total Return Price data by YCharts.

On a down day for the market, shares of one particular penny stock -- but not a penny company, mind you -- roared Wednesday.

Reporting earnings for its fiscal third quarter after close of trading Tuesday, small-cap fuel-cell power-plant maker FuelCell Energy (NASDAQ: FCEL) treated its shareholders to a 3% increase in their share price the following day. But was it deserved?

That's what we're here to find out.

In a press release made available on its own website and filed with the SEC, FuelCell reported that its fiscal Q3 sales declined 4% to $41.4 million, but net losses also declined -- from $0.03 lost in last year's Q3 to $0.02 lost this year. This bad news paired with (apparent) good news compared favorably to analyst estimates for the quarter, exceeding Yahoo! Finance expectations for an even smaller sales quarter, while matching analysts' predicted net loss.

That "beat" alone was probably sufficient reason to spark investor enthusiasm Thursday. But it wasn't the only good news FuelCell had to tell. Among the other highlights, the company says it has booked its first sale of a "megawatt-class power plant" in Europe and inked an agreement to develop a fuel cell project with European power utility E.On. Perhaps most important, FuelCell says it added $26.1 million to its order backlog over the past three months.

Now for the bad news.

What FuelCell didn't say (or wished it didn't have to say)
What FuelCell failed to emphasize is that the $338.3 million now sitting in its order backlog may be up sequentially, but it is down 3% from this time last year.

Also unemphasized was the fact that if losses declined, this wasn't because FuelCell's business got any more efficient. To the contrary, FuelCell's gross margins contracted by 50 basis points year over year, and its operating loss actually increased, from $6 million one year ago to $7.1 million in Q3. It was really only a $1.5 million gain from "other income" that saved the company from a greater per-share loss.

Well, that and the share count. Another big reason per-share losses declined so much was that these losses were split up among many more shares. Since last year's Q3, FuelCell's diluted share count has grown by more than 40 million shares -- up nearly 16%. Naturally, therefore, the company's $7.3 million Q3 loss looked smaller when counted out in pennies among so many more shares.

Final point: Perhaps the most important metric in evaluating any company's health is its ability to generate cash to keep its operations going, as measured in free cash flow. Now, FuelCell didn't include a cash flow statement in its earnings release, but it did include one in its subsequent 10-Q filing with the SEC. And what that shows is that FuelCell did not, in fact, generate any free cash flow in the quarter.

Cash is king
Given that, according to data from S&P Capital IQ, it's been 17 years -- since 1998 -- since FuelCell last reported generating positive full-year free cash flow from its business, this is probably not a huge surprise. But the scale of FuelCell's cash burn is kind of surprising. Subtracting H1 cash burn of $$15.6 million (per Capital IQ figures) from year-to-date cash burn, as reported in the 10-Q ($39.3 million), it appears that FuelCell ran free cash flow-negative to the tune of $23.7 million last quarter, burning 52% more cash in Q3 than it had burned in Qs 1 and 2 combined!

And circling back to the issue of stock dilution, discussed above, this might actually explain the continued growth in the company's share count. After all, if you can't make money selling product, the only remaining solution is to raise cash from selling shares.