PTC Therapeutics' stock has been spiraling downwards ever since the company released its second-quarter earnings report. Should investors buy this dip?

What: Shares of the small-cap biotech PTC Therapeutics (PTCT 0.56%) fell by approximately 25% last month, and are now down around 50% from their 52-week highs. Although the vast majority of biotechs and biopharmas had a rough time last month, PTC's massive drop is remarkable in that it actually dramatically outpaced the broader industry's downward spiral in August: 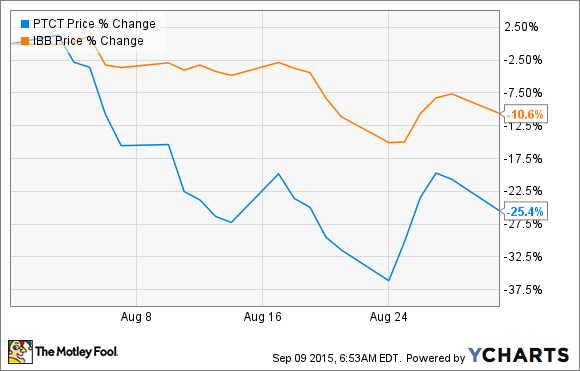 The stock's decline began almost immediately after the company released its second-quarter earnings report in late July. Investors were apparently displeased with the slow commercial launch of PTC's flagship Duchenne muscular dystrophy, or DMD, drug Translarna, which is indicated for patients with nonsense mutations, and conditionally approved in the EU. Specifically, the drug has only generated $11.2 million in sales throughout the first half of 2015. Worse still, the drug has penetrated a mere 4% of its target market in the EU so far.

So what: Investors initially believed that the huge unmet medical need for DMD would translate into a rapid uptake for Translarna, potentially putting the therapy on track to eventually reach blockbuster status. But the early sales suggest that Translarna's somewhat unimpressive efficacy results in its completed midstage study have yet to convince doctors that this therapy is worth the price.

Now what: Translarna's confirmatory late-stage trial is set to readout in the fourth quarter of this year, according to PTC. If this trial meets its primary endpoint, the company plans on filing for regulatory approval in the U.S. Another potential upside to a positive data readout is that it might finally convince regulators in England to fund the drug. On the flip side, a failure may cause the European Medicines Agency to revoke the therapy's conditional approval.

Given that this upcoming binary event could cause shares to crater in a hurry in a worst-case scenario, I'm personally content to keep this speculative stock confined to my watchlist for the moment. After all, there should be plenty of upside remaining if Translarna's late-stage trial passes muster, as it would hopefully lead to an upswing in sales in the EU, and a regulatory approval in the U.S., as well.