Ford's plan in Europe is gaining traction in the market, and investors hope to see that translate into better financial performances in the region soon.

In recent times, it was common for some investors to dread quarterly reports from Ford Motor Company (F 3.89%). It wasn't because it was performing poorly -- in fact, Ford had made extraordinary progress rebounding from the financial crisis and reinventing its entire vehicle portfolio.

Most investors dreaded the quarterly report because, no matter how great things looked in the grand scheme of things, Ford's operations in Europe were a black hole that obliterated billions of profits since 2012 and overshadowed more positive developments. 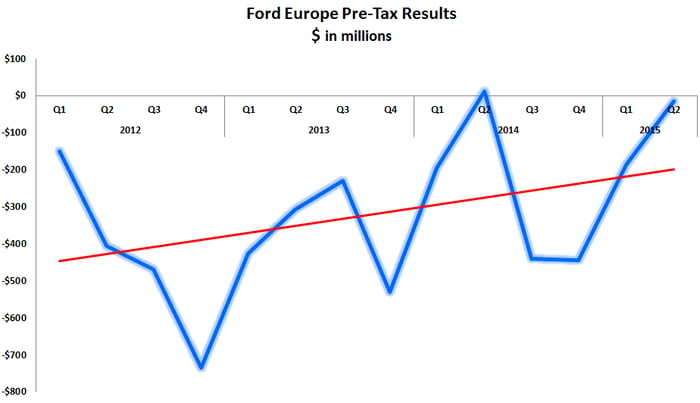 Transformation plan
In 2012, Ford committed to improving its product, brand image, and costs within its European operations. Much progress has been made in all three aspects, including delivering on the automaker's commitment to launch at least 25 new products from 2012 to 2015. With its products, Ford has achieved best-ever levels of reliability and customer satisfaction, and has the most five-star Euro NCAP-rated vehicles of any brand.

Brand-wise, Ford has opened up an upscale brand in Europe named Vignale, which isn't designed to lure customers from traditional European luxury brands but rather to convince loyal mainstream Ford buyers to stay with the company through a more premium brand. Also, Ford has made significant progress in commercial vehicles (CVs), which are very profitable. Ford moved from Europe's seventh-largest CV brand in 2012 to the No. 1 spot currently, and remains the No. 2 total vehicle and passenger car brand in Europe.

Ford has also made strategic decisions, albeit tough ones, to improve costs and manufacturing capacity; for example, it closed its long-standing Belgium plant. Also, beyond controlling its costs, Ford has focused on improving which business channels it sells its vehicles to, delivering more units to healthier retail and fleet channels rather than lower-margin rental and demonstrator channels. 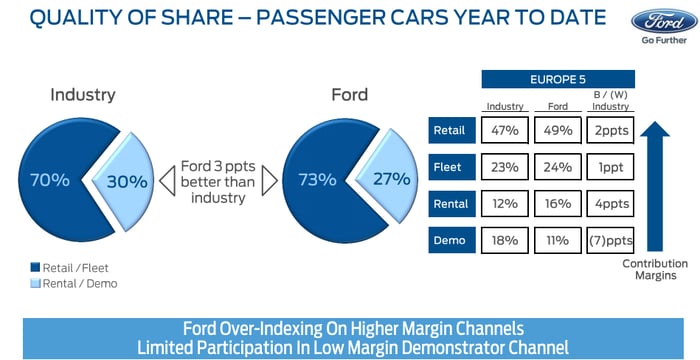 As Ford's newer models continue to gain traction in Europe, sales and market share have improved. Just last month, Ford sold roughly 69,000 vehicles in its 20 traditional European markets and more than 838,000 vehicles through the first eight months of 2015; those are respective year-over-year increases of 12% and 10%. "Ford is becoming a much more vibrant, emotionally appealing brand in Europe -- from the new Mondeo Vignale, S-MAX and Mustang to our new flagship FordStores opening across Europe -- and customers are responding," said Jim Farley, chairman and CEO of Ford of Europe, in a press release.

Looking ahead
Ford's positive sales momentum will likely continue as five all-new or redesigned vehicles in the SUV and crossover segments will hit the roads in Europe in the next three years, starting with the Edge. Ford expects a 200% increase in its SUV brand sales by the end of 2016, compared to 2013.

Ultimately, Ford's transformation plan has finally begun to pay off in terms of sales, and it will continue to become more evident in the company's improved regional financials throughout the remainder of 2015 and through 2016.