We all agree or disagree on stocks, and that's OK. Without differing opinions on company prospects or stock valuations, we wouldn't have a market. But every once in a while, two high-profile investors take opposing positions in the same company, and it can make for some interesting conversation. Last month we saw Carl Icahn announce that he took a large stake in LNG exporter Cheniere Energy (NYSEMKT:LNG), while Jim Chanos announced that he was shorting Cheniere just a month later. The two polar opposite investments are bets on the success of LNG and its future in the market.

Which one of these two activist investors are on the right side of this bet? We asked three of our contributors which side of the LNG debate they were on. Here's what they had to say.

Matt DiLallo: I have to admit, both bring up very valid arguments with Cheniere Energy. It was a first mover for LNG in the U.S., and that's given the company a competitive advantage to be a key supplier of LNG to the world. In fact, the company estimates that it will control 14% of worldwide LNG capacity by 2025 if all goes according to plan. Clearly, this is a very valuable position to hold, which is why Ichan wants to make sure the company gets the most out of it.

Chanos, on the other hand, is arguing that there's a glut of LNG coming to the market and that Cheniere Energy will get burned by its overbuilding. Having seen a natural gas and oil boom and bust over the past few years, an LNG bust wouldn't be out of the question. In fact, given all the major LNG projects either under construction or in planning, I'd say it's a near certainty.

That's why I'm leaning toward Chanos' position, as Cheniere Energy just worries me. It has taken on an incredible mountain of debt via a very complex structure. Just one look at the following slide sends shivers up my spine. 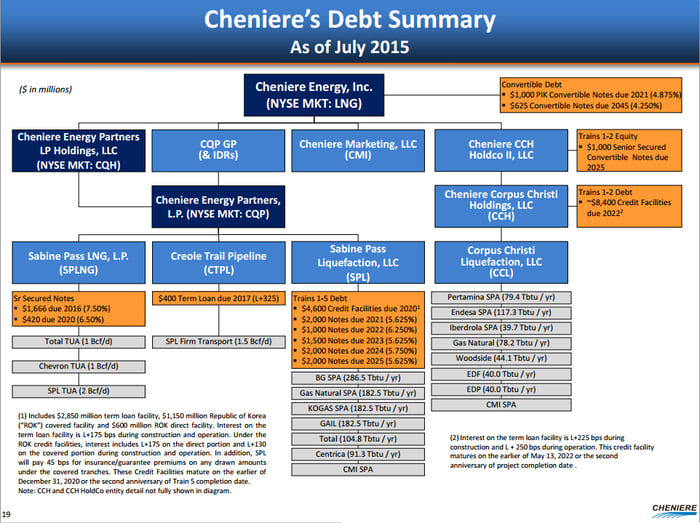 Further, I have grave concerns about Cheniere CEO Charif Souki. He's not only the guy who had one of the most lavish pay packages in the energy industry that saw him earn $142 million in 2013, but he has also started and failed at oil and gas exploration and importing LNG already. That just doesn't give me the warm fuzzies about his ability to create value for shareholders.

Given how volatile and unpredictable the energy industry can be, a pure play on one aspect of it is a very risky proposition. That risk is further magnified at Cheniere because of its incredible debt load and its not-so-investor-friendly CEO. While I'm not convinced that it is a "disaster waiting to happen" as Chanos puts it, I do agree with him that the "risk/reward ... is just completely out of whack."

Jason Hall: I'll side with Icahn on this one, for what may be the second time ever.
Let me offer a counter to a few of Matt's points. Sharif Souki's compensation at times has been borderline ridiculous, but he's also the company founder, and heavily invested in the company's long-term success. Through the most recent SEC filing, he held more than 4.6 million shares of Cheniere stock and also holds a significant number of shares in the company's master limited partnership, Cheniere Energy Partners (NYSEMKT:CQP), so I don't know that I agree that he's a shareholder-unfriendly CEO.
I think it's also unfair to call his initial efforts to start a LNG import business a failure. After all, when he made that decision, it was well before the shale revolution that has led the U.S. to the top of global natural gas production. As a matter of fact, the consensus was that the country was running out of natural gas.
I think it's more important that he was willing to see the massive sea change of shale gas as an opportunity, versus getting too caught up in trying to make what would be a failed business work. And so far, Cheniere has been a huge success because of Souki's leadership, not in spite of it.
Lastly, there are some short-term concerns with LNG, with a lot of LNG production and shipping capacity coming online in the next several years coinciding with some weakness in Asia, but I think Chanos is overstating the big-picture risks. Yes, LNG prices in Asia are falling, but that's likely to help boost demand. Eventually the market will find an equilibrium that works for both suppliers such as Cheniere and consumers in markets with limited domestic supply.
Chanos will probably make money on his short, simply because his influence on traders can create a self-fulfilling prophecy in the short term. But looking at the bigger long-term picture, LNG demand is going to grow, and Cheniere is likely to reward investors who stay in for the long term.

Tyler Crowe: I agree with them both, just on different points. From a long-term perspective I'm siding with Icahn. Much of Chanos' argument is based on the idea that China's appetite for LNG will start to wane, and that the large buildout of LNG facilities globally will lead to the renegotiation of contracts with Chinese suppliers.

That may make sense for LNG in general, but one issue with that argument is that the two facilities Chinere is building in the Gulf Coast have very little of their existing contracts supplying Chinese buyers. 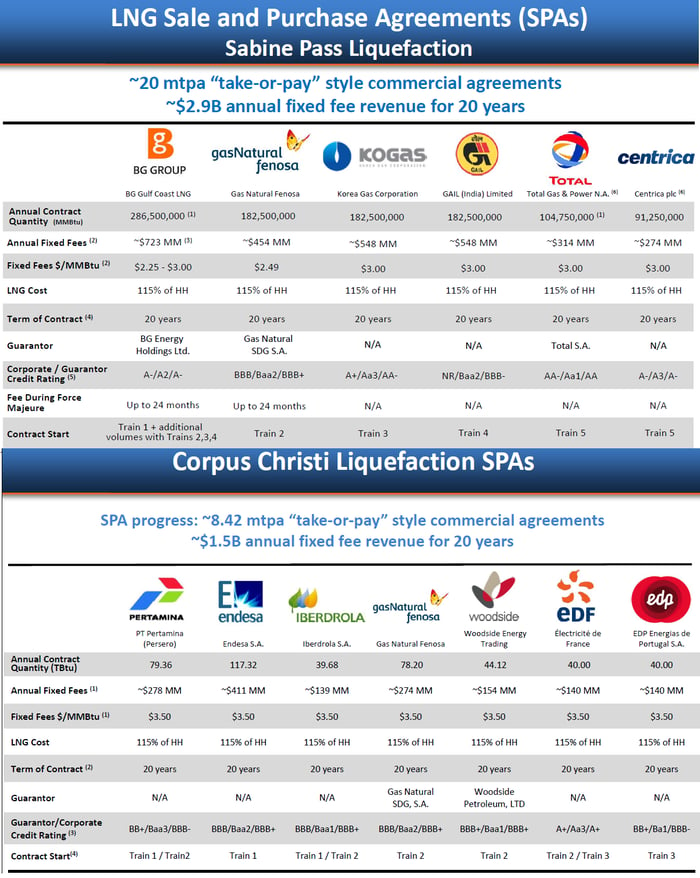 Of course, there are some residual effects of slowing Chinese demand, such as lower prices for LNG not sold under contracts, but that will affect about 20% of the company's total LNG shipments. So over the long term it appears that Cheniere's position in the LNG space is pretty good.

The one thing with which I do agree with Chanos is that Cheniere's share price is a bit too frothy. According to Cheniere's EBITDA projections, the company's current share price equates to a total enterprise value-to-EBITDA ratio of more than 11 in 2021. That is a lot of opportunity cost for something that really won't generate a return for several more years.

That's why, instead of looking at the parent company, a potentially more attractive investment is Cheniere Energy Partners. This is more akin to direct ownership of just the Sabine Pass LNG facility and the cash it will generate once it's up and running at the end of this year. Also, the partnership is slightly less exposed to some of the financial wizardry that was done to finance these projects. It may not be the exact same thing as agreeing with Icahn, but from a long-term perspective it looks like the better investment today.

Who's Right About the Future of LNG: Carl Icahn or Jim Chanos? @themotleyfool #stocks $LNG $CQP Next Article
Current