Please ensure Javascript is enabled for purposes of website accessibility
Log In Help Join The Motley Fool
Free Article Join Over 1 Million Premium Members And Get More In-Depth Stock Guidance and Research
By Matthew DiLallo - Sep 30, 2015 at 10:35AM

Halliburton Company looks below the surface to improve well results.

One of the key focuses of oil companies during the downturn in crude prices is lowering their costs. This helps them improve their cash flow as well as their drilling returns. Most of the focus on costs, however, has been on what drilling companies can see. They are optimizing their operations to drill faster and they are squeezing costs out of their cost structure. While that's all well and good, it's just one side of the drilling equation. It's that other side, the one below the surface, that Halliburton Company (HAL 0.39%) is attacking head on in order to lower the cost per barrel of oil and gas.

The numerator
At a recent industry conference, Halliburton President Jeff Miller pointed to the following slide and said: 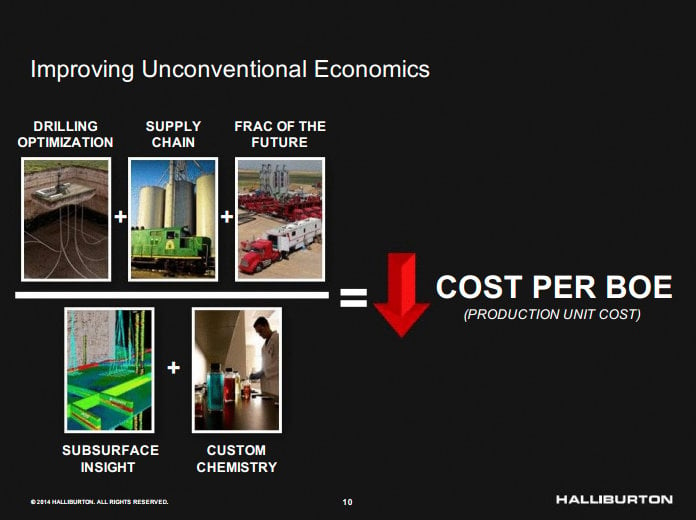 The numerator is where the industry has spent much of its time over the last decade. It was driving down drilling days per well, and managing the rising logistics piece of its business, and then ultimately enabling 24-hour operations.

He also noted, "Halliburton has been involved in all aspects of this, and we continue to be." He further said that the company is "at every step optimizing bit designs, fluid compositions, reducing the drilling days, and in some cases or in many cases, reducing drilling time by over 50%, meaningful contribution to efficiency." This is because "efficiency is critical" and that's largely due to the fact time really is money in the energy industry. Every day a company can shave off its drilling time saves it money. For example, drilling rigs are leased at a day rate, so just cutting drilling time reduces the amount of money spent on a leased rig. Having said that, this side of the equation is only part of the story.

The denominator
Miller went on to say:

Better wells will ultimately carry the day. It's the denominator, identifying the best targets, the right chemistry in producing more barrels, and so with that, let's talk about how we see this progression.

In other words, drilling fast and cheap is great, but what's better is to drill the best well possible. That work starts below the surface.

He then pointed to the following slide and said: 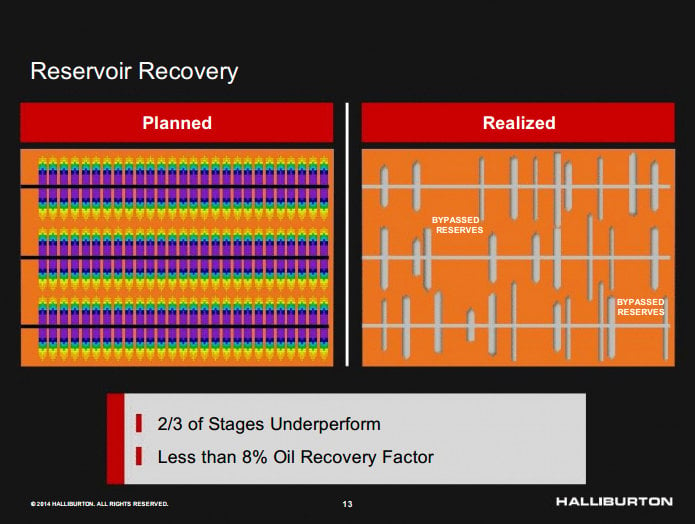 Let me start with a generic development plan. So what you see here [in the above slide on the left], is an image from a reservoir simulator. The three horizontal black lines are horizontal wells and they are drilled into an orange reservoir. This is a simple geometric design. The wells are evenly spaced. The fracs are evenly spaced. The purple sections, are the proposed fractures showing the highest drainage area around the wells. Now this design assumes a great deal...It assumes that the rock is homogeneous. It assumes that the formation is evenly pressured, and it assumes that the treatment will be evenly distributed. Now this methodology has been widely practiced in North America shale development. Fine in theory, but in practice. It's not necessarily the way things really work. The rock is not uniform. The pressure differentials vary, and the treatment frequently misses the mark. In fact, we see this fairly consistently and in fact we estimate that two thirds of the stages, in one way or another, underperform, or in some cases never connect, leaving significant bypassed pay. Reality is, we are only draining a part of the reservoir.

In other words, a well is designed for the ideal below-surface situation. Unfortunately, that ideal situation hardly ever exists, which causes wells to underperform their potential, leaving lots of oil and gas -- more than 92% of it in most cases -- still trapped within the reservoir. This is because two-thirds of frack stages completely miss connecting the well with oil- and gas-bearing rocks.

This is why Halliburton is focusing a lot of its attention on making better wells by focusing below the surface. It goes back to the first slide of having better subsurface insight through core samples and data. It also means having custom chemistry, instead of a one-size-fits-all approach. On the chemistry side, for example, Halliburton has developed AccessFrac, which is divergent chemistry. What it has been able to do is increase the stimulation of oil and gas to get it to flow so that it increases production from a well. Another solution developed by Halliburton is RockPerm, which combines the sub-surface insight with chemistry. The net result, according to Miller is that "on average, we see a 20% to 25% uplift" in production when the RockPerm technology is used.

Investor takeaway
One of the positive outcomes of the downturn in oil prices is that it's forcing the industry to attack its cost structure both above and below the well. Halliburton is particularly interested in finding solutions to the other side of the equation because developing a better well from below ground will enable oil companies to capture more resources instead of leaving them trapped below the surface. That will improve production and drilling returns, enabling companies to better handle lower oil prices.