What: Shares of teen apparel retailer Zumiez (NASDAQ:ZUMZ) took a dive last month, falling 33%, according to data from S&P Capital IQ. As you can see from the chart below, the vast majority of the drop came on Sept. 11 following a disappointing earnings report. 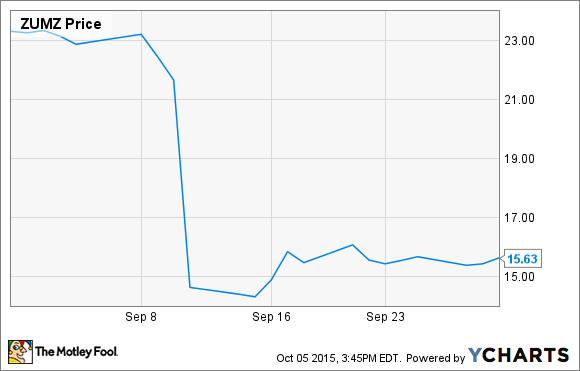 So what: Zumiez's once-strong growth has come to a halt as sales improved just 1.8% in the quarter, while comparable sales -- an important figure in the industry, as it strips out the effects of new stores -- fell 4.5%, down from a 3.4% increase in the same quarter a year ago. Even worse was the sharp drop in net income, which fell $0.26 a share to $0.11. CEO Rick Brooks blamed a lackluster response to the company's merchandise offerings and said the company had to be more promotional than normal in its U.S stores, though European performance remained strong.

Unfortunately, the company's August results, which came after the quarter ended, were even worse, as sales fell 7.2% on a 10.7% drop in comparable sales. Despite the trend, Zumiez is sticking with its plan of opening 57 stores this year, about 44 of which will be in the U.S.

Now what: Zumiez appears to be succumbing to the fate of other teen retailers like Aeropostale, American Eagle, and Abercrombie & Fitch, which have seen sales decimated in the past couple of years as tastes have shifted to fast-fashion brands like H&M and Zara. Other surf brands like Quiksilver have also fallen on hard times. Zumiez is working hard to update its fashion to fit today's trends, but that's often a difficult challenge to overcome when customers are fleeing stores.

The stock has been erratic over the last five years as the company's results have varied, but it sank to a five-year low following last month's earnings report, indicating the urgency of the sales decline. With a P/E of just 12, shares may seem cheap, but I would stay away until the company emerges from this tailspin. Fashion is notoriously fickle, and brands can lose favor just as quickly as they get hot. Opening new stores could also be a further drag on cash flow at at time when the chain is losing organic sales.