Shares of Bank of America (NYSE:BAC) trade for a 27% discount to book value. How do you reconcile the fact that the nation's second-biggest bank by assets trades for much less than its stated worth? The six explanations below go a long way toward doing so.

1. Return on equity
Of all the reasons that Bank of America's shares trade for a discount to book value, the main one is its low return on equity. After accounting for the risk of owning a particular bank stock as well as the opportunity cost of not owning a risk-free investment such as a Treasury bond, a bank stock creates value for its shareholders only if the company earns more than 10% on its equity. Because Bank of America hasn't come close to this mark since the financial crisis, its share price has been left to offset the difference, which is why they're so cheap. 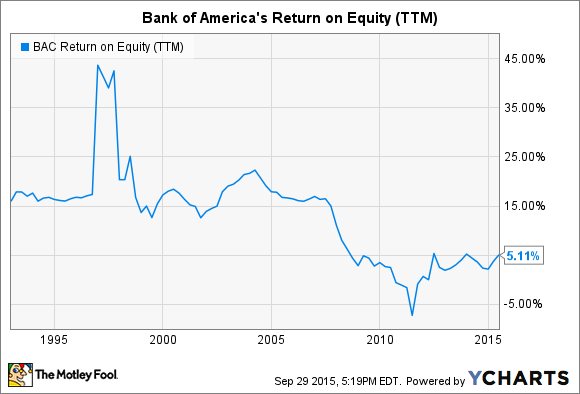 2. Revenue
The reason Bank of America's return on equity has been in the doldrums since the crisis originally had to do with its expenses, which were higher due to elevated loan losses, increased costs associated with servicing delinquent mortgages, and an unconscionable amount of legal losses. As the Charlotte, North Carolina-based bank has worked hard to address these issues, its biggest problem has now switched to revenue generation. The chart below should make this clear, as Bank of America earns substantially less revenue relative to its shareholders equity than its principal competitors, JPMorgan Chase, Wells Fargo, and U.S. Bancorp. 3. Interest rates
Interest rates also likely play a central role in the valuation of Bank of America's stock. The current interest rate environment is unprecedented. Never before in modern financial history have rates been this low for this long in the United States. Because this drives down the interest rates on loans, it also weighs on Bank of America's revenue. To put this into perspective, an increase in both short- and long-term interest rates of a single percentage point would boost the bank's top line by an estimated $4.6 billion a year. 4. Profits and losses from trading
A fourth reason that Bank of America's shares trade at such a paltry valuation compared to other major banks is because it has one of the most complicated and volatile operations of any company in the United States. In particular, as a universal bank (meaning that it has both traditional and investment banking operations) it relies on trading profits for approximately $2 billion worth of quarterly revenue. Because this line item is so volatile compared to the lending operations of a traditional bank, it makes sense that investors give its stock a lower valuation, as they do with JPMorgan Chase.

5. Home equity loans
Bank of America's portfolio of home equity loans is also likely causing investors pause. Home equity loans are generally structured as open lines of credit. As a borrower taps into the line, they're obligated to make monthly interest payments. However, the loan's principal doesn't start coming due until 10 years after the credit line was opened.

This means that the nation's biggest banks are just now starting to absorb losses from home equity loans made in final years of the housing bubble. In Bank of America's case, for instance, 45% of its $81 billion home equity portfolio were underwritten in 2006 and 2007. Of the ones that have started amortizing, moreover, 14% of them are nonperforming. It seems safe to assume, in other words, that Bank of America's loan losses could surge over the next two years. Data source: Office of the Comptroller of the Currency. Chart by author.

6. Stress test
The financial crisis spawned countless new rules and regulations that banks must now follow. Foremost among these are the stress tests administered each year by the Federal Reserve, the purpose of which is to determine whether the nation's biggest banks have enough capital to survive an economic downturn of roughly equal severity to the financial crisis. So long as they do, and so long as the central bank doesn't take issue with a bank's capital planning process, then the participating banks are generally allowed to return more capital to shareholders by way of higher dividends and share buybacks.

Bank of America has struggled to get through these tests. In three out of the last five years, it's received at best only conditional approval to return more capital to shareholders. "The general belief is that [Bank of America's] capital is trapped," Charles Peabody, an analyst at Portales Partners, recently told The Wall Street Journal. Its stress test problems, Peabody continued, "puts a cap on their ability to raise their dividend and/or buy back shares. That is a concern, because it has a big impact on how the stock should be valued."