Please ensure Javascript is enabled for purposes of website accessibility
Free Article Join Over 1 Million Premium Members And Get More In-Depth Stock Guidance and Research
By Daniel Miller - Oct 10, 2015 at 10:12AM

Fueled by generous Labor Day promotions and stronger consumer demand for light trucks, the U.S. automotive industry in September posted a very strong seasonally adjusted annual sales rate, or SAAR, of 18.17. The industry posted a 15.7% gain in sales over last year's September to top 1.4 million in unit sales. Basically, it resembled a slow-pitch softball thrown toward a Major League Baseball slugger -- and the industry hit it out of the park. 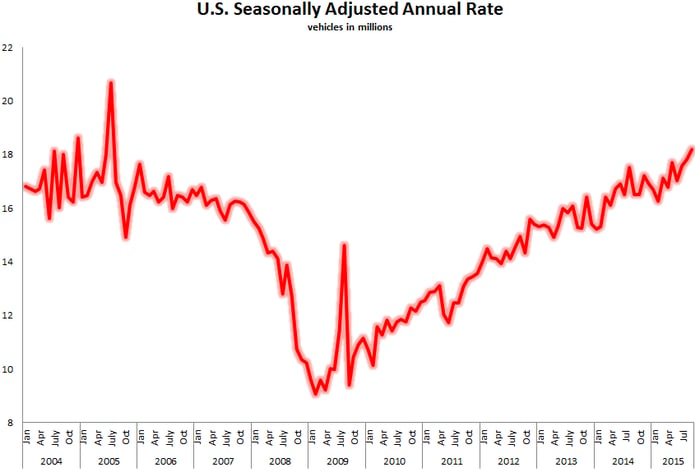 However, despite the very strong sales and double-digit gains by major automakers, there was a catch. As Stacey Doyle, senior industry analyst for TrueCar, noted in a press release: "The incentive-to-average transaction price ratio has been at somewhat higher than normative levels for three consecutive months. Typically, automakers ease up on incentives in October and November."

That will be something for investors to keep an eye on during the fourth quarter, but for now, let's look at the September sales highlights from Ford Motor Company (NYSE: F), General Motors (NYSE: GM), and Fiat Chrysler Automobiles (NYSE: FCAU).

Ford Motor Company: 23% year-over-year gain to 221,599 units sold
There was no segment left behind at Ford, which recorded a 15% sales increase with its passenger car sales, a 23% gain with its SUVs, and a very strong 29% gain in its truck segment. Despite Ford's passenger cars selling well, the story was definitely in its SUVs and trucks.

Ford's most important product line, the F-Series full-size trucks, nearly hit 70,000 units sold in U.S. for the second straight month -- and historically, sales of around 55,000 to 60,000 qualify as a strong month. That near-70,000 sales number was a 16% increase overall, led by a strong 28% increase at retail; Ford will continue to catch up on fleet deliveries of its F-150 in the fourth quarter.

Further emphasizing the success of light trucks last month was Ford's SUV lineup, which achieved its best September results in 12 years. The Escape posted a record September sales, up 31% to more than 28,000 units. Not to be outdone in terms of year-over-year gains, the Edge and Explorer increased sales by 33% and 38%, respectively. Expect sales of Fords' F-Series and SUV lineup to fuel financial success in the third- and fourth-quarter reports.

Another interesting thing for investors to note is the continued success of the EcoBoost engine lineup. When September was all said and done, EcoBoost represented 64% of the F-150 retail sales last month, and the engine itself was sold within roughly 733,000 Ford vehicles in 2015. That's already an annual record for the EcoBoost engine lineup, with three months remaining in the calendar year.

FCA's success has recently been driven by its Jeep brand, which posted a hefty 40% sales increase: the brand's third best sales month ever (not just September, but the third best of any month). The Cherokee posted its best monthly sales ever with a 38% increase in sales to more than 20,000 units, and the Wrangler posted its best September sales ever with a 26% gain to more than 17,500 units sold.

While FCA certainly posted solid September sales results, investors should note that sales of the Ram truck slowed slightly and remained flat year over year. That leaves the Ram truck's full-year sales increase at a meager 3%, and that could slow even more as sales of Ford's F-Series look to increase in the fourth quarter and GM's Silverado and Sierra have remained strong sellers throughout 2015.

General Motors: 12% year-over-year sales gain to 251,310 units
While GM's total sales gain of 12% lagged behind the competition and the automotive industry overall, the automaker could at least boast that its retail sales were up 17% compared to a year ago -- that's the sixth consecutive month that GM increased its year-over-year market share gains. Another bright spot for GM was with the company's transaction prices. "Staying focused on core values like initial quality, sales and service satisfaction, cost of ownership, dependability and advanced technology is paying off in higher sales and share, stronger transaction prices and lower incentives," said Kurt McNeil, GM's U.S. vice president of sales operations, in a press release.

GM's average transaction prices rose nearly $800 per unit sequentially, and the automaker's incentive spending was also down a full percentage point over the same time period -- the latter figure was a larger decline than the industry's overall 20-basis-point decline.

While GM's overall sales gains certainly lagged its competitors', investors should be optimistic that increasing average transaction prices and decreasing incentives will help fuel what should be a very profitable third and fourth quarter for Detroit's largest automaker.