In the past few weeks, a vocal minority of Apple (NASDAQ:AAPL) analysts -- most notably, Andy Hargreaves of Pacific Crest Securities -- have predicted that iPhone sales could decline year over year this quarter. Hargreaves in particular believes Apple will sell only 66.9 million iPhones in Q1 of Apple's 2016 fiscal year, down 10% year over year.

The iPhone is Apple's key product, accounting for well over half of the company's revenue and profit. Thus, these worries about a potential iPhone sales slump are likely a major reason Apple stock has declined more than 15% since the company's last earnings report. 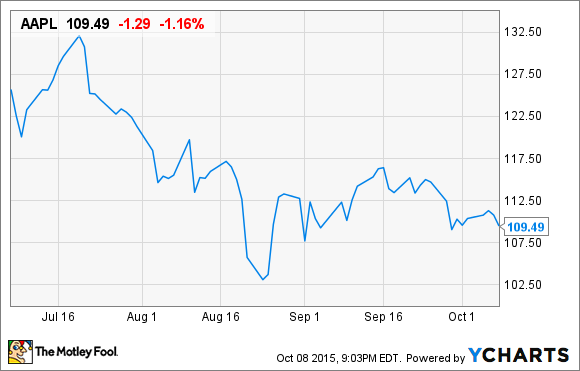 The skeptics argue that demand for the latest iPhones is falling short of last year's staggering demand for the iPhone 6 and iPhone 6 Plus. To some extent, they're probably right. A year ago, there was massive pent-up demand for the long-awaited big-screen iPhones. There isn't a similar level of pent-up upgrade demand this year. Early usage data also points to lower uptake of the new phones.

However, that doesn't necessarily mean Apple's iPhone sales will plummet this quarter. Here are three reasons why.

Another way of thinking about this issue is that last fall, if you wanted a discounted iPhone, you had to take a 4" screen. This year, you have three choices: the 4" iPhone 5s, the 4.7" iPhone 6, and the 5.5" iPhone 6 Plus.

Apple analyst Ming-Chi Kuo estimated in January that the iPhone 6 and iPhone 6 Plus combined had accounted for 80% of Apple's iPhone unit sales in the then-recently ended Q1. That's just one analyst's estimate, but Kuo has a stellar track record for predicting nitty-gritty details like this. And it's worth noting that his total iPhone sales estimates for Q1 and Q2 of last year were accurate to within 1%-2% -- far better than any other analysts.

If this analysis is accurate, it means Apple sold about 15 million older model iPhones in the year-ago quarter.

On the other hand, looking back to fiscal 2014, the top-of-the-line iPhone 5s represented a much smaller proportion of sales. Apple CEO Tim Cook is on record saying the mid-tier iPhone 5c was a greater percentage of the sales mix that year than the comparable mid-tier product in any previous year. One perceptive analysis has estimated iPhone 5s sales in Q1 of fiscal 2014 at just 63% of the total mix.

If Apple's sales mix looks like that again this quarter, then Apple's older-model iPhone sales could total 25 million-30 million units. Even the low-end of that range would be up by about 10 million units year over year.

The timing is different
A second issue Apple skeptics are missing or downplaying is the changed iPhone launch schedule this year. The iPhone 6s and 6s Plus hit stores in the launch markets on September 25, just two days before the beginning of Apple's first quarter. Last year, the iPhone 6 and iPhone 6 Plus went on sale a week earlier, nine days before the beginning of the first quarter.

This change in the launch timing relative to last year means a whole week of initial sales -- including the last day of launch weekend -- got pushed to Q1 this year. That calendar shift could add several million iPhone sales to Apple's first-quarter tally.

Additionally, the iPhone 6 and iPhone 6 Plus didn't launch in China until mid-October last year, whereas China was a launch market this time around. That will give Apple almost three extra weeks of sales in China this quarter compared to last year. This could easily add 2 million iPhone sales for Apple in Q1.

Together, these two timing issues could shift at least 5 million iPhone 6s/iPhone 6s Plus sales into Q1 from the surrounding quarters.

No major shortages this year
The third factor that should bolster Apple's iPhone sales this quarter is that it isn't facing tight supply constraints like last year. The iPhone 6s is currently back-ordered for several days, and the iPhone 6s Plus is back-ordered for 2 to 3 weeks, but based on past precedent, Apple should have no trouble building up stock for both models by mid-November.

By contrast, the iPhone 6 and especially the iPhone 6 Plus were in short supply throughout Q1 last year. Even at the end of the quarter, Apple was below its target for 5 to 7 weeks of channel inventory.

Without such supply constraints this year, Apple should be able to exit Q1 well within its target range for iPhone channel inventory. That would mean increasing this inventory by several million units during the quarter.

Apple could sell a lot of iPhones this quarter
Considering all three of these factors, the underlying demand for the iPhone 6s and iPhone 6s Plus could be down 30% (roughly 18 million units) year over year in Q1 without total iPhone unit sales falling during the quarter. If this underlying demand is down by a more moderate 10% to 15% -- or even 20% -- Apple could actually post iPhone unit sales growth in Q1.

Some of the issues that will bolster Apple's Q1 iPhone sales will fade later in the year, potentially creating tougher comparisons in Q2 and Q3. However, the benefit of solid demand for the discounted iPhone 6 and iPhone 6 Plus should continue throughout the year. And by next spring, investors will already be looking forward to the iPhone 7!