What: Shares of Cepheid (NASDAQ: CPHD), a molecular diagnostics company, fell by more than 20% today on heavy volume after the company released its preliminary third quarter results. Digging into the quarterly numbers, Cepheid now believes its net loss per share will come in at $0.32 for the third quarter, which is $0.06 higher than consensus, according to S&P Capital IQ. Management attributed this larger than expected loss per share to a lower gross margin during the three month period, leading the company to also miss consensus on revenue by around $1.1 million.

The stock's southerly move, though, appears to be more related to the company's updated outlook. Specifically, management's revised annual guidance suggests that total revenue for the year should range from $537 to $541 million. The Street, by contrast, was expecting a figure of around $548.9 million.

So what: Today's hefty drop in Cepheid's share price is particularly noteworthy because it erases over two years of gains: 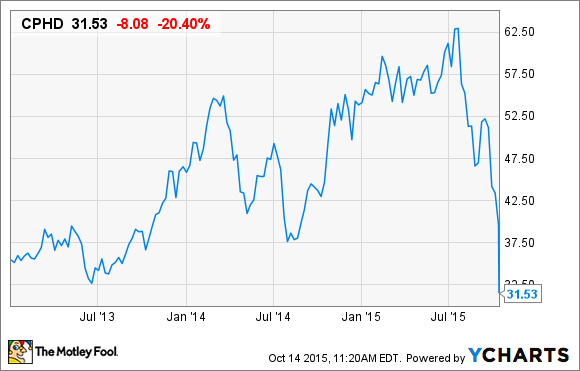 Now what: Despite this revised outlook, Wall Street remains fairly bullish on this stock because of the fully integrated nature of Cepheid's GeneXpert system. For example, the Street believes the company can become cash flow positive on a sustainable basis by 2017, and projects total annual revenue to increase at a compound annual growth rate of around 16% over the next four years. If this line holds true, Cepheid's shares are only trading at a little over 2 times 2019 revenue.

The fly in the ointment of this stellar growth story, however, is that the molecular diagnostics market in general is a highly competitive space. Roche (OTC:RHHBY), for instance, has been making a major push into this area of late, acquiring several companies over the last year to bulk up its molecular diagnostics unit. So, Cepheid's projected double-digit growth rate may ultimately turn out to be little more than wishful thinking. Stay tuned.