One of the great casualties of the oil price plunge are the investments geared toward exploration for new sources of oil and gas. Oil companies have cut deeply into exploration budgets because it's the easiest budget cut to make given the fact that this is an investment that won't pay off for years, if at all. However, it's a deep cut that Anadarko Petroleum Corporation (NYSE:APC) doesn't want to make because exploration spending has been the lifeblood of the company over the years.

The first cut is the deepest

Exploring for oil is a risky and costly venture. Worse yet, it has only gotten more challenging over time, after the industry's success rate for deepwater exploration and appraisal wells has fallen from about 70% in 2010 to less than 40% this year. That's why we've seen a number of oil companies simply abandon offshore exploration programs.

ConocoPhillips (NYSE:COP) is among the most notable examples of this after the company completely abandoned its operated exploration program in the Gulf of Mexico earlier this year. In doing so, ConocoPhillips terminated a rig contract necessitating that it pay a termination fee that represented up to two years of the contract day rate, which was no small sum. While ConocoPhillips hasn't abandoned oil and gas exploration entirely, the company already had a captured resource base totaling 44 billion barrels of oil equivalent, or BOE, giving it more than 30 years of production at its current rate, giving it enough of a cushion that it is not in a rush to find more oil. It also didn't help that the company has drilled a rash of dry holes over the past year, including a dry hole it drilled with Anadarko in the Gulf, leading to a number of writedowns and impairment charges.

Higher risk, higher reward
Despite its own share of setbacks, Anadarko hasn't let a few dry holes impact its continued focus on exploration. Some of that is due to the fact that it has enjoyed a higher success rate than its peers because its deepwater exploration and appraisal success rate is 65%. That success has led to the discovery of more than 4 billion barrels of oil equivalent from its deepwater exploration program alone. This is also why the company has a rather robust exploration program under way in 2015, which is detailed on the following slide. 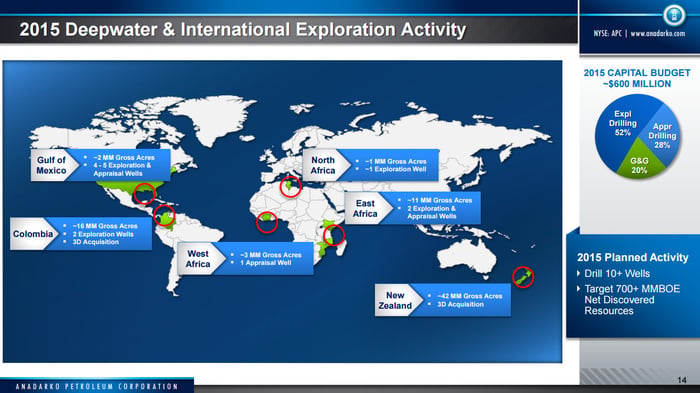 That slide notes that the company expects to spend roughly $600 million, which is a little over 10% of its total capital budget, on exploration-related activities. Incidentally, that's the same percentage of its capex budget the company spent last year. However, for some context, ConocoPhillips' original plan was to spend 13% of its capex budget on exploration and appraisal again this year, but that percentage is poised to trend lower with the the company cutting into that budget after the downturn in oil prices worsened.

That starting point difference aside, another big reason Anadarko isn't showing any signs that the percentage of its budget will be cut is because it has created tremendous tangible value from its exploration program over the years. We can see this on the slide below. 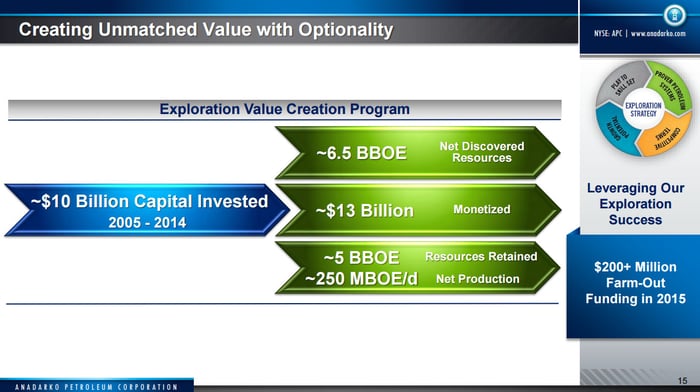 On this slide, we can see that it spent $10 billion on exploration over the past nine years, and it turned that investment into $13 billion in cash plus more than 5 billion BOE in retained resources. That retained resources base is not only driving a lot of current cash flow via production, but it will drive cash flow for years to come by being produced or further monetized. Given the tremendous value it has created, for Anadarko to now cut deeply into its exploration program would be akin to cutting off the lifeblood of its biggest value creator.

Investor takeaway
While peers like ConocoPhillips are axing pieces of their exploration programs because of risks and costs, Anadarko continues to push forward. A big reason why has to due with its confidence in light of the fact that it has enjoyed a much higher exploration success rate, especially in the deepwater, than its peers. However, it also doesn't want to give up on what has worked so well, with the risks it took to explore for oil and gas offshore having clearly paid off. That is a trend it expects -- and investors hope -- will continue.