The wireless phone business is very competitive space, where the major players are constantly trying to steal customers away from each other. To do that, U.S. wireless carriers spend lots of money on television ads each month trying to convince potential customers that their network is better.

Spending money to stay on top
Wireless carriers have to play a difficult game of convincing subscribers to stay with their network. While this has almost always been the case for carriers, it's become even more important as the wireless industry has moved away from two-year contracts.

We won't know if the ads from September have paid off for the carriers until they report their next quarterly earnings. But what we do see is that both AT&T and Verizon are shelling out the most cash to hold on to customers and find new ones.

Aside from their ad spending, the nation's top two carriers are also dropping large sums of money on making their networks even stronger. Here's how much the top four carriers will spend this year in network improvements:

For AT&T and Verizon, spending billions on their network and then spending millions to promote those networks appears to be a winning combination. The two carriers easily outpace T-Mobile and Sprint's subscriber numbers: 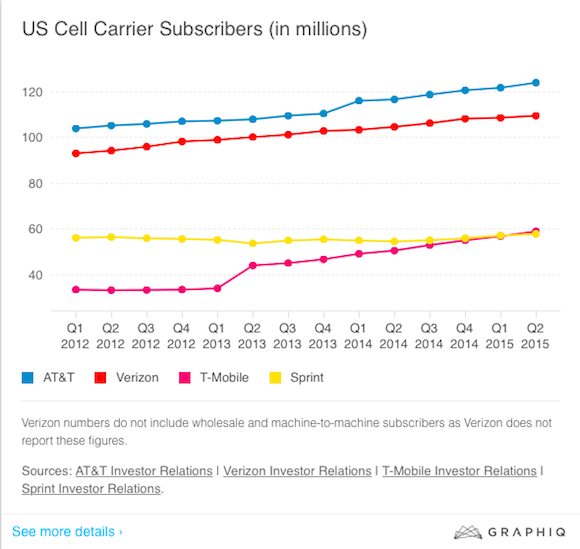 But that doesn't mean other carriers can't make gains of their own if they spend less. T-Mobile will spend just a third of what AT&T and Verizon will spend on network improvements this year and only accounted for 10% of all wireless carrier ad spending last month, yet the carrier has added 1 million or more net subscribers each quarter for the past 10 quarters. That growth has propelled T-Mobile past Sprint as the nation's third-largest carrier by subscribers.

Who comes out on top
Judging by the amount Verizon and AT&T spend on their networks and advertising, it's unlikely T-Mobile or Sprint will come close the No. 1 or No. 2 wireless career spot anytime soon. Even T-Mobile's impressive customer growth will have to slow down at some point as the carrier pivots to making more money per user (as opposed to just piling on new customers).

At this point, it's more of a two-tier race with Verizon and AT&T competing at the top and Sprint and T-Mobile battling it out at the bottom. While T-Mobile and Sprint may make big gains against each there at times, Verizon and AT&T's lead it secure for now.