When LinkedIn (NYSE:LNKD.DL) reported third-quarter results last week, the online network for professionals proved to investors it's still in a position to grow revenue. Even more, management gave investors insight into areas of its business that look poised to grow even further.

Where is the growth?
Growth was a key concern headed into the company's quarterly report, as LinkedIn has recently struggled to grow its revenue sequentially. Even on a year-over-year basis, LinkedIn's revenue growth has arguably been unimpressive -- at least when compared with similar-sized social network Twitter (NYSE:TWTR).

Twitter has the opposite problem; revenue growth seems to be achieved with little effort while user growth is incredibly weak. Twitter's revenue jumped 58%, year over year, in the social network's just-reported quarter. That figure compares with LinkedIn's year-over-year revenue growth of 37% in Q3. Yet Twitter's users grew by less than a percent sequentially, while LinkedIn's increased by more than 4% between Q2 and Q3.

Some investors have wondered: Will LinkedIn's healthy year-over-year revenue growth continue decelerating rapidly? Even worse, could LinkedIn's revenue growth come to a halt? But the company's most recent earnings report -- and the call following the report, in particular -- have moderated these worries.

Here are some important excerpts from LinkedIn's third-quarter earnings call hinting at more growth ahead.

The Lynda.com acquisition is panning out
LinkedIn's acquisition of Lynda.com earlier this year didn't come cheap, priced at $1.5 billion in LinkedIn stock. Management has been under pressure to prove this shareholder dilution was worth it. 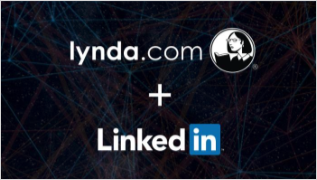 Fortunately for the leadership team, there are already good signs that the acquisition is panning out well. Even more, Lynda.com is shaping up to be a key catalyst for further growth.

LinkedIn's adjusted EBITDA of $208 million, which amounts to 27% of revenue, exceeded management's expectations for the quarter. While LinkedIn said higher-than-expected revenue drove over half of this outperformance, management also credited decreasing costs for its new Lynda.com unit.

"The remainder of over performance was tied to lower expenses oriented across several areas, including Lynda and facilities," said LinkedIn CFO Steven Sordello during the call.

Better-than-expected results from the Lynda acquisition are also evident in the company's decision to increases its guidance range for the full year by $35 to $40 million.

"[T]he majority of the outperformance was driven by Q3 results, with the remaining increase from a slight up-tick to our Q4 outlook for both our core business and Lynda," Sordello said.

China: a small but important catalyst
Membership in the company's new China platform has grown from 4 million last February to "north of 13 million most recently," Weiner said during the call.

While the CEO emphasized that monetization is a secondary priority in the market right now as the company focuses on member value propositions, he did admit LinkedIn believes there are "meaningful opportunities there on the monetization front."

LinkedIn continues to deliver for shareholders. The company is executing well not only on its core products, but also with its Lynda.com acquisition. That and LinkedIn's developing market in China are both morphing into compelling opportunities for long-term growth.