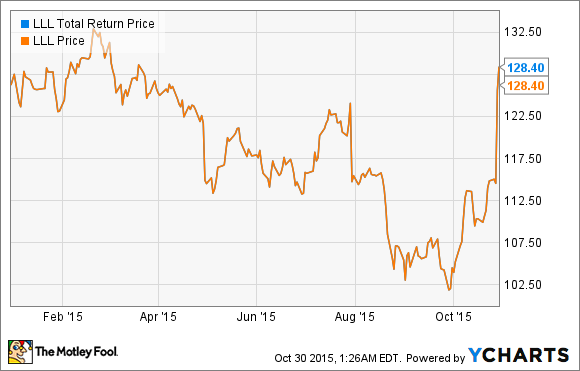 L-3 stock has been on a tear these past few weeks -- but that still leaves the stock trading around what it cost at the start of the year. LLL Total Return Price data by YCharts.

Headlining its earnings announcement with a report of $2.8 billion in quarterly sales (analysts had been looking for $2.9 billion) and "adjusted diluted earnings per share" of $2.09, L-3 came very close to burying the lede.

True, analysts had been looking for L-3 to produce pro forma earnings of just $1.81 per share, and in that respect, the $2.09 L-3 says it "earned" came as a pleasant surprise (and probably explained the stock's 2% rise day-of). But even so, the really big news of the quarter was a massive $5.79-per-diluted-share charge to earnings taken on the company's National Security Solutions (NSS) business. Subtracted from the "adjusted diluted" result that L-3 had emphasized, that left L-3 smarting from a $3.74-per-share GAAP loss for the quarter.

Aside from that, Mrs. Lincoln...

Be that as it may, L-3 worked hard to put a happy face on the quarter, with CEO Michael Strianese emphasizing the company's "higher segment operating margins" for the quarter, and its continued shift toward "structurally stronger, higher-yielding businesses where we maintain leading positions."

The company's biggest business, Aerospace Systems, posted a 9.7% profit margin, 350 basis points better than last year. And its smallest division, NSS, posted only a 2.7% profit margin, down more than half from one year ago.

Of these four divisions, the last two -- L-3's biggest and its smallest -- both shrank in size year over year. The two others, Aerospace and Communications, both grew modestly, in the 2%-3% range.

Valuation
Given the various segments' various trends through the first three quarters of this year, L-3 has issued revised guidance featuring:

But ending on a happy note, management still thinks it can end the year with free cash flow of about $850 million, GAAP troubles notwithstanding. So where does this leave investors?

Weighed against the company's $10.3 billion market capitalization, these numbers imply a valuation of about 12.1 times free cash flow on the stock (16.4 times FCF when valued on enterprise value). Given that analysts quoted on S&P Capital IQ only expect to see L-3 grow its profits at about 7% annually over the next five years, however, these valuations seem optimistic -- and this is even after giving L-3 the benefit of valuing it on free cash flow, which currently looks a lot healthier than L-3's trailing GAAP earnings.

Accordingly, even though L-3's price-to-sales ratio is currently just 0.9, and even though that seems a historically cheap ratio for a large defense contractor like L-3, I cannot endorse the stock at today's valuation. In my opinion, L-3 simply costs too much to be worth buying at today's prices.