Three years ago, without warning, Twitter (NYSE:TWTR) changed how developers could interact with its platform. The developer community was none too happy as third-party clients were hobbled, and many viewed Twitter's actions as anti-competitive.

At Twitter's second annual Flight conference for developers last month, CEO Jack Dorsey apologized for the company's past mistakes and said he hopes the company can rebuild a relationship with third-party developers. It released a slate of new tools for developers, and it's also offering them a chance to promote their mobile apps more easily on Twitter. And they can use those promotional tools for free. 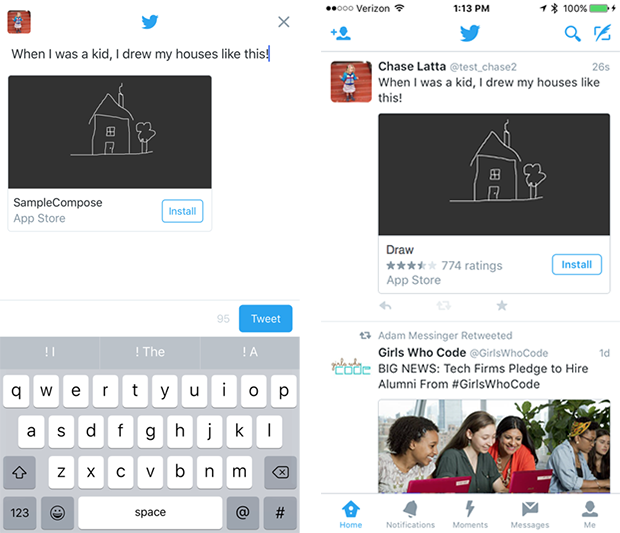 Free advertising could get developers to come back
Twitter unveiled a couple of new features that anyone with a mobile app will like, because who doesn't like free promotion?

First, it unveiled App Spotlight, which enables developers to place an app-install button at the top of their Twitter profiles. Coupled with the ability to pin a tweet to the top of their list of tweets, this could drive additional app downloads for users simply browsing Twitter.

Facebook (NASDAQ:FB) offers similar functionality for Pages, enabling page owners to place a call-to-action button in the header of their page on desktop and right below the header on mobile. That includes an install button, but also buttons such as "Shop Now" or "Subscribe" for e-commerce sites and email newsletters. Twitter may expand to those verticals, but developers are certainly the most lucrative people to attract for mobile advertising.

Second, Twitter updated its in-app tweet composer, allowing users to preview tweets before publishing them. Developers now have the option of adding an app-install card to those tweets, with a feature called Timeline Install Action. Twitter believes the ability to preview tweets before publishing them will increase total tweets sent from third-party apps, since users will know exactly what they're posting. That would naturally increase engagement for Twitter, and Twitter wants to give developers incentive to include the feature with the install button.

If developers see good conversion from the free promotion they're getting through App Spotlight and Timeline Install Action, they may be compelled to pay for app-install ads on Twitter to boost those installs. Twitter has been improving its targeting capabilities around app installs over the past year, specifically by collecting data on what apps users already have installed on their devices. That could enable app-install ads to convert even better than Timeline Install Action placements.

But the real value comes from having Twitter sign up more users to use its software development kit, Fabric. These new promotion features are available only by using tools in Fabric to develop apps. Fabric is tightly integrated with Twitter and its mobile-ad platform, MoPub. That's where Twitter stands to really benefit.

MoPub already claims to reach 1 billion devices, but it's not clear how many apps it reaches or how popular those apps are. Getting more developers to use Fabric instead of competing SDKs such as Facebook's Parse, increases the likelihood they'll choose to monetize their apps with MoPub instead of Facebook's ad network or a competing product.

With limited user growth on Twitter and a lack of monetization on its other consumer-facing apps, Vine and Periscope, management may look to MoPub to drive revenue growth over the next few quarters. Increasing the number of developers using Fabric will help boost results for the mobile ad platform.