A dividend is not only an important way for a company to return value to its shareholders, but it's also often viewed as a signaling mechanism. Rising dividends are seen as suggesting good things ahead; falling dividends the opposite.

But Newmont Mining Corp (NYSE:NEM) turns that on its head. Here's why and how the recent dividend declaration is a bigger deal than you may think.

Commodities are tough
When times are flush, a gold miner like Newmont can have more cash then it knows what to do with. That's because gold prices often advance much faster than the cost of mining, so there's leverage to the upside. That's true throughout the commodity market. However, it's doubly true of Newmont, because it doesn't lock in gold prices with hedges, so as gold goes, so go Newmont's top and bottom lines.

That, of course, means Newmont's results can be more volatile than competitors that hedge, but it also means Newmont will be among the first to benefit (and get hurt by) gold's moves. Times are tough right now, and Newmont's results are, predictably, suffering relative to when gold was hitting new highs not too long ago.

So, it shouldn't be any surprise that Newmont's dividend has fallen from over $1.40 a share in 2012 to a run rate of about $0.10 a share per year recently. Many other miners have cut dividends, too, including Barrick Gold (NYSE:GOLD), which trimmed its payout from an annual $0.75 a share in 2012 to a current run rate of about $0.08. But don't read too much into this at Newmont, because its dividend is linked directly to the price of gold.

There's a link, here
Newmont has basically embraced the idea that gold is a volatile commodity and tied its dividend to explicit gold price ranges. So, as gold goes up in price, so does your dividend. And as gold's price declines, so does the dividend. It's almost a refreshing arrangement in that it is both open and, so long as you understand it, logical.

That said, the company's dividend is slated to be cut to zero if gold prices fall below $1,200 an ounce. In the second quarter, Newmont's realized gold price was $1,179 an ounce. That should have triggered the elimination of the distribution based on the plan. It didn't. The company decided to keep paying $0.025 a share in the third quarter. 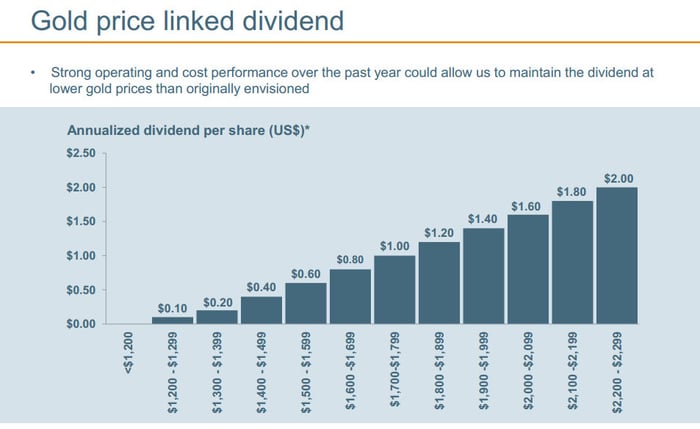 What's the signal?
When making the announcement of the dividend, the company noted:

The average London Bullion Market Association (LBMA) P.M. Gold Price during the second quarter fell below the Company's gold price linked dividend policy threshold of $1,200 per ounce. The Board of Directors authorized the Company to maintain the dividend for the third quarter based on strong year-to-date operating and financial performance.

In other words, Newmont is trying to make a statement that things are bad, but maybe not as bad as you think. Could that change? Clearly it could. But for right now, the company is confident enough in its financial and industry positions to keep returning value to shareholders via the distribution. Which is a huge takeaway, and one that makes even a small $0.10 a year dividend a big piece of information. However, if you didn't understand the dividend policy, you might not have seen just how large a statement the continuation of the dividend was.

Newmont Mining is clearly not appropriate for conservative investors because its financial results and dividend are both tied tightly to often volatile gold prices. That will make both very volatile over time. However, if you are a bit more aggressive, and willing to dig just a little into the story behind the numbers, Newmont can be a great way to get exposure to the yellow metal. Right now, the company may be saying something important with its dividend, even though it's a paltry payment compared to recent years.

Newmont Mining: The Dividend Is a Bigger Deal Than You Think @themotleyfool #stocks $NEM $GOLD Next Article
Current