Putting Tesla's expectations into perspective
When Tesla reported third-quarter results, Tesla said it expected to deliver 17,000 to 19,000 vehicles during Q4. While this outlook would put the company in the low-end of its full-year guidance range for 50,000 to 55,000 deliveries, investors were expecting the company to guide for Q4 deliveries that would put Tesla below its expectations for the full year. A slow initial ramp of Model X production would weigh on fourth-quarter deliveries and prompt Tesla to lower its full-year outlook, some investors reasoned. But, as it turned out, management believes rising demand for Model S is enough to help Tesla achieve its record-smashing quarter in spite of a slow ramp in Model X production.

To illustrate how significant Tesla's guidance for Q4 is, consider these two charts.

This first chart clearly shows just how record-breaking these results would be if they were achieved. 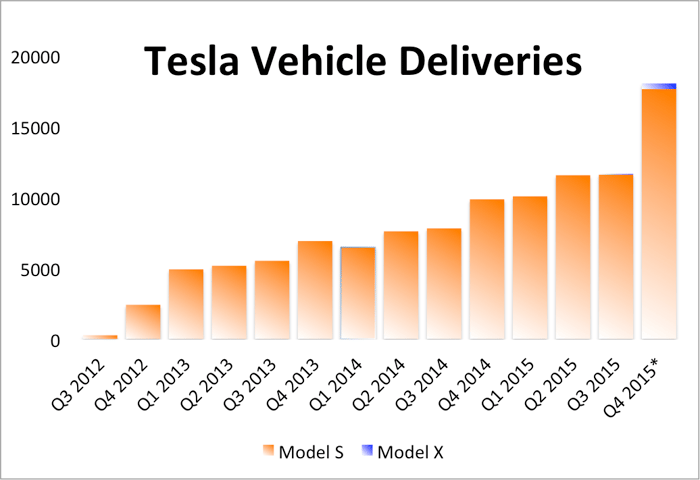 Quarter marked with asterisk indicates management estimate. Guidance midpoint for forecasted range is used for Q4 2015. Breakdown of Model S and Model X in Q4 is an author estimate, derived from comments by management in the third-quarter letter to shareholders and conference call. Chart source: author

This second chart illustrates how Tesla's vehicle sales growth on a year-over-year basis is, in general, accelerating -- and Tesla's Q4 expectations extend and amplify this trend. 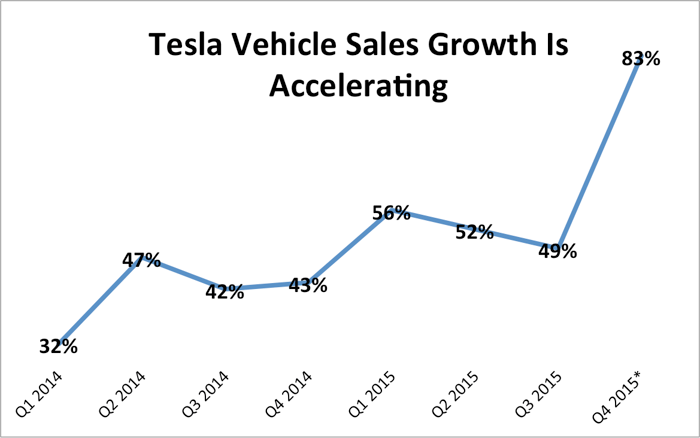 Growth for quarter marked with asterisk is based on management forecast. Midpoint for management's forecasted range for Q4 2015 is used to calculate year-over-year growth. Chart source: author

First, consider Tesla management had over a month of vision into the fourth-quarter when it reported third-quarter results and shared guidance for the year's final quarter.

Second, Tesla has a very good track record of living up to its own quarterly guidance. 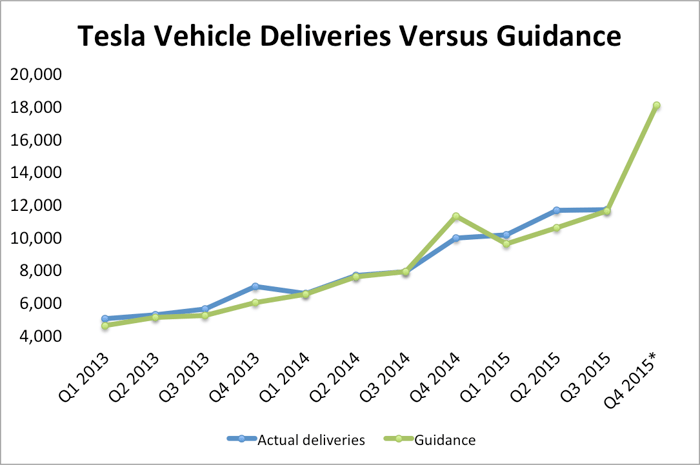 Tesla has achieved its guidance in 10 of the last 11 quarters.

While Tesla did miss its guidance for Q4 last year, the guidance provided by management ahead of the quarter was a specific target -- not a range, as management's guidance is this year. Further, Tesla management said during the company's third-quarter earnings call that the low end of its guidance this year has attempted to bake in potentially severe weather, holiday delivery issues, and contingencies for Tesla's ramp in production of its Model X.

Tesla's big expectations in Q4, even as the company expects to only produce several hundred Model X vehicles a week toward the end of the quarter, highlights Tesla's incredible growth story.

Investors should take note of the significant trajectory of Tesla's vehicle sales. It's particularly encouraging ahead of a ramp in production of Tesla's big bet on Model X, which management expects to double the company's addressable market.