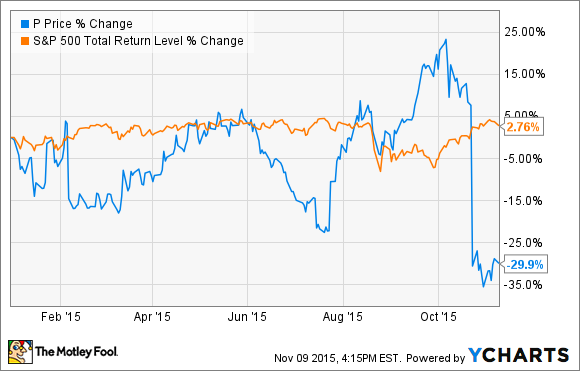 So what: That's not to say Pandora's actual third-quarter results were bad. Revenue climbed 30% year over year to $311.6 million, driven by improved monetization and a healthy 52% bump in local advertising revenue. And adjusted net income rose 12.8% to $22.9 million, or $0.10 per diluted share. The figures fell comfortably within Pandora's guidance ranges provided three months earlier, and remained roughly in line with analysts' expectations.

However, Pandora also saw its number of active listeners decline around 1.6% sequentially to 78.1 million. According to management, that was largely due to "significant category spending and trial offers across multiple players" in the space, notably including the recent launch of Apple Music. Pandora also surprised investors by striking a $90 million settlement with several record labels regarding its use of pre-1972 recordings, taking significant charges during the quarter to do so.

To Pandora's credit, CEO Brian McAndrews also suggested the competitive impact of the former was "muted," and most similar to the near-term effect Apple Radio had on the service two years ago. This bodes well for Pandora's chances to resume sequential listener growth going forward. In addition -- and keeping in mind Sirius XM struck its own $210 million settlement for pre-1972 recordings only a few months ago -- McAndrews defended Pandora's similar move as "resolving a historic source of tension" with the industry professionals on which the companies profitable existence relies.

Now what: Even so, Pandora also reduced the midpoints of its 2015 guidance for revenue by $24.5 million, to a new range of $1.153 billion to $1.158 billion, and adjusted EBITDA by $26.5 million, to a new range of $51 million to $56 million. For that, Pandora blamed a combination of lower expected growth in listener hours (which will crimp ad revenue), and its decision to focus on integrating its $450 million acquisition of Ticketfly (which will help diversify its revenue base).

However, I'm still not convinced these near-term competitive concerns and small guidance reduction were together worthy of such a steep decline in Pandora's share price, especially as Pandora continues to manage its business with maximizing long-term profitability in mind. To the contrary, as long as Pandora continues to improve monetization and maintain its leadership position in music streaming, I think investors would do well to use this pullback as an opportunity to open or add to a position.