The results are in. In October, for the first time in months, Boeing (NYSE:BA) beat Airbus (OTC:EADSY) in the race to sell the most planes in a calendar month.

The horse race
Late last week, we updated you on Boeing's airplane sales for the first full month of fall. For a change, Boeing didn't "fall" short. The Seattle planemaker added nearly five dozen new planes to its order book last month, which now stands at 566 gross plane orders, or 489 net of cancellations.

Airbus, in contrast, took in barely half as many October orders as Boeing did -- just 35 new planes tacked onto its tally. Airbus entered October with a commanding lead over its rival, however, having outsold Boeing nearly 2 to 1 through September. As a result, despite lagging behind its rival last month, Airbus has won 850 net new orders year to date.

The details
We'll discuss how Airbus has been thrashing its rival this year in a bit, but first, the obligatory details on Airbus' month that was. On Friday, Airbus released a report describing firm orders for the month of October. These included:

Where is Airbus beating Boeing?
Despite lagging in October, Airbus retains a commanding lead over its rival. But how? It really comes down to just one plane -- or rather, one plane, and one family of rivals to it.

So far this year, both Boeing and Airbus have sold roughly equal numbers of ultra-long-range "widebodies." Gross orders of Boeing 747s, 777s, and 787s, three planes of similar wingspan, total 137, versus Airbus orders for 133 A330s and A350s. Boeing also has orders for four dozen smaller, shorter-range 767 widebodies, however. Factor those into the mix, and there's an argument that Boeing leads Airbus in the market for "widebodies" as a whole.

Where Airbus really breaks away from its rival, though, is in the market for smaller, regional, single-aisle jets. The 777 "A320 Family" aircraft ordered from Airbus this year outnumber Boeing's best-selling 737 orders (381 of them) by more than 2 to 1.

On the other hand, Airbus' second-best seller, the A321neo, costs $124.4 million -- 6.7% more than the Boeing 737 MAX 9. True, commenters on civil aviation website Airliners.net argue that the A321 is simply a better plane than the "underpowered and inferior" MAX 9. But that's a subjective opinion. Here's an objective fact:

Over the past year, the euro has lost about 15% of its value relative to the U.S. dollar. 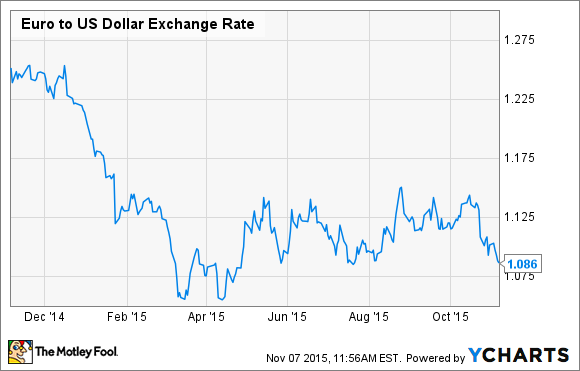 With both A320 and 737 aircraft priced internationally in dollars, you might think exchange rates are a non-issue. But in fact, the weakening euro means Airbus' costs for parts and labor in building its A320s are going down, while Boeing's are going up -- each relative to the other. This gives Airbus added wiggle room to sell its aircraft at cheaper-than-list prices, winning sales and stealing market share from Boeing, while still maintaining (and indeed growing) its own profit margins.

So yes, Boeing beat Airbus in October. But over the long run, this is still Airbus' race to lose. As long as exchange rates work in its favor, expect Airbus to outsell Boeing in the all-important single-aisle plane market.

As the euro plunged, Airbus sales took off in 2015. Image source: Airbus.