Stock indexes started today's session in the red -- and the selling pressure never let up. By 4 p.m. EDT, the S&P 500 (SNPINDEX:^GSPC) and the Dow Jones Industrial Average (DJINDICES:^DJI) both gave up 1.4%. With those drops, both indexes have once again slipped into negative territory on the year. 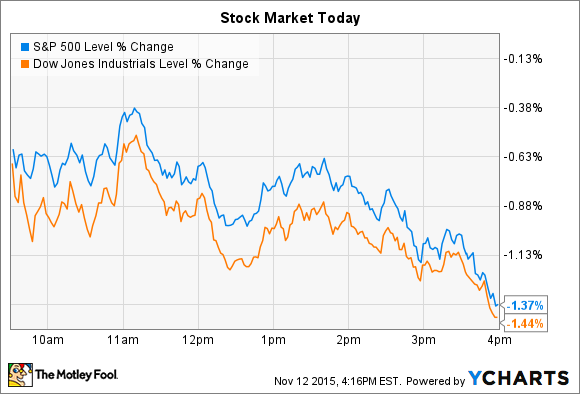 Advance Auto Parts retreats
Advance Auto Parts was the single biggest percentage loser in the S&P 500 today, falling 14% after the company posted surprisingly weak third-quarter results. Sales growth slowed to 0.5% at its existing automotive parts stores, down from a 1% improvement in the prior quarter. And while profit crept higher to $1.95 per share, the increase was below management's target. Executives blamed slowing sales growth and rising costs from integrating its recently acquired General Parts business .

The good news is that profitability held steady as Advance showed discipline on its operating expenses. Yet earnings could come under pressure soon, given that sales growth trends seem set to turn negative as early as the current quarter. In fact, Advance warned about a "soft start" to the fourth quarter and said it is planning to close 30 more stores before the year is out -- in addition to the 50 it had originally planned to axe. The company also lowered its earnings outlook for the full year.

Adding uncertainty to that shaky operating environment, Advance announced that its CEO, Darren Jackson, will be retiring after serving in his position for the last eight years. The current board of director's president, George Sherman, will step in as an interim chief executive. Sherman's challenge will be to successfully integrate the General Parts operations while also working to get sales and profit growth back on track.

Kohl's stops the sales slide
Shares of department store Kohl's closed up 7% as investors were relieved by the retailer's third-quarter earnings results. Comparable-store sales rose by 1% over the last three months, which stacks up nicely against the prior quarter's flat result – and against the 4% drop that rival Macy's posted yesterday. The small but steady improvement was "driven by strong back-to-school and late October selling periods offset by a weak September," Kohl's CEO Keven Mansell said in a press release. Chief Financial Officer Wesley McDonald described it as a rebound in a conference call with analysts. "We have effectively reversed the downward sales trends that we were experiencing," Wesley said .

Kohl's hasn't had to resort to increasing promotions to keep customer traffic figures ticking higher, either. In fact, gross profit margin held steady at 37% of sales as lower expenses generated a small improvement in net profit margin, which rose to 3.3% of sales from 3.2% in the year ago period .

In contrast to Macy's big earnings outlook downgrade this week, Kohl's management left their full-year profit target in place. That forecast calls for earnings of roughly $4.40 per share, and investors apparently found the resulting P/E ratio of 10 times 2015's profit a good enough reason to buy into this beaten down stock today.