The terrorist attacks that struck Paris last Friday have put airline investors on the defensive. Shares of American Airlines (NASDAQ:AAL), Delta Air Lines (NYSE:DAL), and United Continental (NASDAQ:UAL) had already started to give up their October gains last week, and they all fell again by 2%-3% on Monday morning. 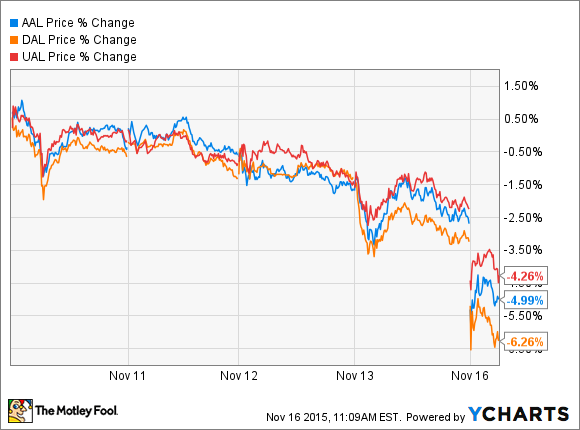 Does this pullback in major airline stocks represent a warning sign of more trouble to come? Or is it a good opportunity to invest in these companies? Let's take a look.

The terrorism threat will hit demand
Among U.S. commercial airlines, American, Delta, and United are the only three that fly to Europe.

The direct impact to them from the terrorist attacks last week was relatively minimal. While France closed its borders immediately following the attacks, the airports remained open. So while there were some delays and one cancellation (an American Airlines roundtrip from Dallas-Fort Worth), most flights operated normally.

However, just because flights are operating doesn't mean that customers will want to fly. Several people that spoke to the Associated Press had canceled trips to France or were considering doing so due to fear about potential follow-on attacks.

Aside from security concerns, tourists have also faced uncertainty about what they would be able to do in Paris. Numerous major landmarks like the Louvre and the Eiffel Tower were closed over the weekend, although they reopened on Monday afternoon. Travelers have also been warned that movement through the city may be restricted.

Notable geopolitical events also have a way of disrupting demand more broadly in the short term. For example, United Continental reported that China's relatively insignificant devaluation of the yuan in August caused a temporary drop-off in bookings for travel between China and the U.S. A major terrorist attack could have a much bigger effect.

How big is the impact?
That said, American, Delta, and United don't have so much capacity deployed in France that a downturn there would have a dramatic impact on their results.

Even for Delta, the entire transatlantic market represents less than 20% of total revenue. Much of that traffic flows through other major European hubs -- mainly London and Amsterdam -- or directly from the U.S. to other cities in Europe, Africa, India, and the Middle East. This should blunt the impact of any drop in demand for travel to (or through) Paris.

Delta has the most exposure to France of any U.S. airline. Photo: The Motley Fool

Additionally, while American, Delta, and United all waived change fees for customers traveling to or through Paris, none of these waivers extends beyond Nov. 22. Furthermore, airlines are offering only to change customers' travel dates. They aren't providing refunds for non-refundable tickets. The tickets they have already sold for the next few months represent a cushion against any short-term drop in travel demand.

This too shall pass
Unlike the 9/11 attacks, the attacks in Paris last week did not specifically target air travel. As a result, while there was a broad-based downturn in air travel following 9/11, there is no reason to expect that to occur here.

Airlines -- and airline investors -- should be prepared for a few weeks or even a few months with significantly fewer people buying tickets to Paris. There could even be a modest impact on other air travel due to the inevitable uncertainty about whether other major cities will be next.

However, American Airlines, Delta Air Lines, and United Continental face this situation from a position of strength -- they all have double-digit profit margins. This makes a travel downturn that is mainly limited to a small proportion of their global route networks quite manageable.

Furthermore, oil prices are sliding again, providing another tailwind for airline profitability. Finally, all three airline stocks already trade for less than 10 times projected 2016 earnings, so there's plenty of margin for error in case it takes longer than expected for demand to recover in the coming weeks and months. This should help the airlines bounce back relatively quickly from this unfortunate incident.