What: After a 20% run-up in October, tepid financial guidance and slower-than-hoped top line growth has caused shares in Castlight Health (NYSE:CSLT) to tumble 21% thus far in November.

So what: The healthcare data analytics company uses information provided to it via health insurers, such as Anthem (NYSE:ANTM), to create healthcare cost solutions for consumers. Castlight's software is deployed by healthcare payers, such as self-insured employers, to help consumers find and use healthcare services that are less expensive.

The appeal of competition-boosting insight is big, but Castlight's market is young, evolving, and, so far, unprofitable.

In February, Castlight issued full year guidance that called for top line sales of between $74 million and $77 million and non-GAAP basic and a diluted EPS loss of between $0.69 and $0.73 in 2015.

The company refined that outlook by maintaining its top line forecast and slightly improving its per share loss range to between $0.66 and $0.71 at the end of Q2.

However, the company's results ran a bit behind in Q3, forcing it to lower its full year outlook to include sales of between $74.7 million and $75 million and a loss per share of between $0.68 and $0.70.

Admittedly, the shifts in guidance aren't big, but they're not worth cheering about either -- especially considering that top line sales are decelerating.

Now what: Because growth is being built on top of a higher base, a slower growth rate isn't unexpected. However, absent a significant change in the company's spending, or a surge in sales, it's uncertain when Castlight could turn a profit. 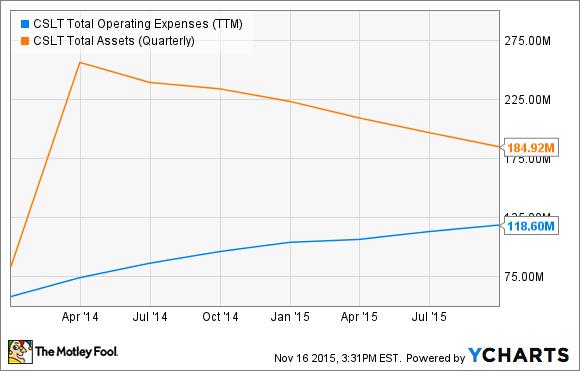 Adding to investor concerns is Castlight's reliance on third-party data feeds from insurers like Anthem. While Castlight has agreements that allow it to use data from insurers to create its solutions, there's no guarantee that Anthem, or its competitors, will continue to allow Castlight to access their feeds on terms that are as favorable as they are now, nor is there any guarantee that these data vendors won't eventually end up competing with Castlight.

So, although there's a need for new data tools allowing healthcare consumers to make better decisions regarding their care, including the costs associated with it, Castlight's financial situation and questions surrounding the long term viability of its business model makes this stock too risky for me to consider buying, even at these lower levels.