"Ford Mustang inspires passion like no other car," said Raj Nair, Ford Motor Company's (NYSE:F) group vice president of Global Product Development, in a press release earlier this year. "[The] Mustang is definitely more than just a car -- it is the heart and soul of Ford."

Nair sums up the iconic pony car pretty well; that's why he gets paid the big bucks. Back when Ford's team was designing the 2015 Mustang, they faced a formidable challenge in that the design couldn't alienate loyal Mustang enthusiasts but also had to be modernized to attract a new and younger consumer -- otherwise, the iconic car would face a continued decline in sales. 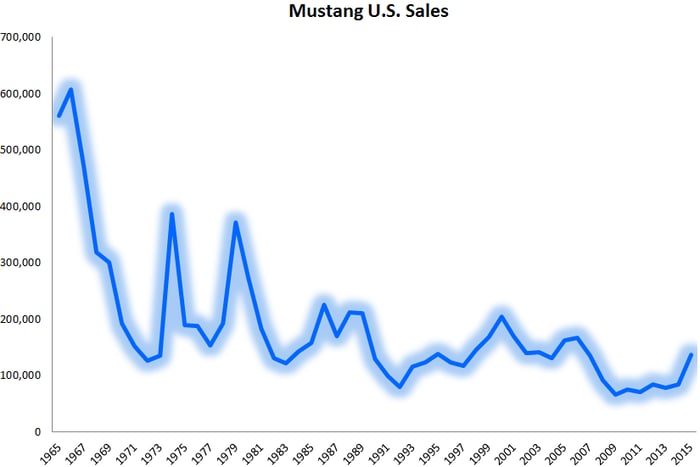 Fortunately, if Mustang sales this year are any indication, Ford absolutely hit a home run. Let's take a look at the sales and how they compare to competitors', and why it matters.

Sales racing higher
Ford's Mustang fell only about 500 sales short of breaking 10,000 during September in the U.S., but it prevailed and topped that sales figure in October. Those 10,096 Mustangs sold in the U.S. last month represented the model's best October sales performance since 2006, and it was a staggering 121% increase over last year's October sales result. Last month wasn't a one-hit wonder, either, as sales of the iconic muscle car are up 65% year to date through October compared to last year.

If the Mustang continues to sell at this pace for the rest of 2015, it would be the vehicle's best total year of sales since 2007 and it would put some serious distance between the vehicle and its archnemesis, General Motors' (NYSE:GM) Chevrolet Camaro. 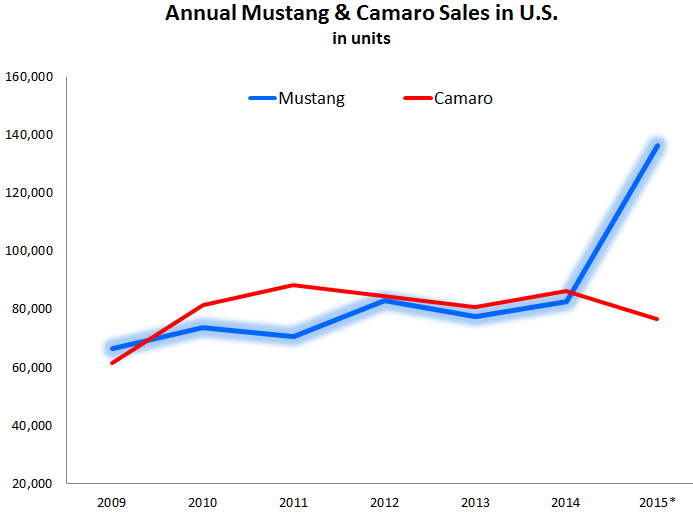 One factor fueling the Mustang's sales is its improved fuel economy without sacrificing power -- thus keeping the door open for historic muscle-car buyers as well as opening the door for a newer, more fuel-conscious consumer.

Consider this: Two decades ago, a Mustang GT generated roughly 215 horsepower from its massive 5.0-liter V8 engine while the 2015 Mustang EcoBoost generates 310 horsepower from a 2.3-liter four-cylinder turbocharged engine. The 2015 Mustang EcoBoost, a brand-new engine option for the Mustang, generates more horsepower with an engine half the size, which translates into highway miles-per-gallon of 31 -- that compares favorably to the 1995 Mustang GT, which would be lucky to reach 25 mpg on the highway.

Some of you are probably rolling your eyes and saying that's not an apples-to-apples comparison. It's not supposed to be. Two decades ago, there wasn't a fuel-efficient muscle car, and today there is. It'll likely be the reason we are about to witness a real revival in muscle-car sales.

While Camaro fanboys don't want to hear about the spike in Mustang sales, they should actually be happy, because the Camaro is likely to follow suit next year when sales of the 2016 Camaro take off. GM is following the Mustang's footsteps, and for the first time since the 1980s, the Camaro will offer consumers a four-cylinder engine: a turbo 2.0-liter that will generate 275 horsepower. That's in addition to the V6 option, a 3.6-liter engine that will generate 335 horsepower or a 455 horsepower V8 in the SS version. The muscle-car loyalists can still get their power-driven V8 version, but the four-cylinder is opening a new door for a younger consumer who wants a sleek-looking Mustang or Camaro with better fuel economy and a turbo engine option. Ford and GM understood the change necessary to revive muscle-car sales, and that's a good thing for the Detroit automakers.

Does it matter for investors?
If sales of the Mustang continue to rebound in the years ahead, and Camaro sales follow, what does that mean for investors? After all, we know it's sales of SUVs and full-size trucks that make big profits for Ford and GM. However, there's another angle for investors to be happy about.

Ford's Mustang is what we call a "halo" car. It's a vehicle that is the face of the automaker, more of a symbol of what the company is about and a direct attempt to attract a younger consumer and additional foot traffic to stores. The higher-priced Mustangs, like the Shelby GT 350, literally make consumers turn their heads when they drive by the dealership.

The importance of cars like the Mustang stretches far beyond the sales column in Ford's monthly reports in other ways, too. How many times have you seen a Fusion -- a car that is selling nearly three times more than the Mustang in the U.S., for the record -- on a poster in a kid's room? How many Focuses have you seen on the front cover of a car magazine or in a Need for Speed movie?

The Mustang's brand image is immensely powerful here in the U.S., and this year the 2015 Mustang was engineered for customers in more than 100 markets across the globe to try to export that brand power overseas.

The Mustang's recent success because of the EcoBoost engine option is a huge deal, and it goes far beyond just the 65% increase in U.S. sales this year. Make no mistake, if we witness a real rebound in muscle-car sales over the next five years, it will be just another reason to be glad you're a Ford and GM shareholder.