Opko Health (NASDAQ:OPK) has certainly put its investors on one heck of a roller-coaster ride this year. In June, shares of this biopharmaceutical and diagnostics company had more than doubled in value since the start of the year, riding high as investors were still excited about its announced collaboration deal with Pfizer (NYSE:PFE) combined with its buyout of Bio-Reference Laboratories. However, shares soon came crashing back to earth after the company whiffed on its second-quarter results and then got caught up in the biotech bloodbath. 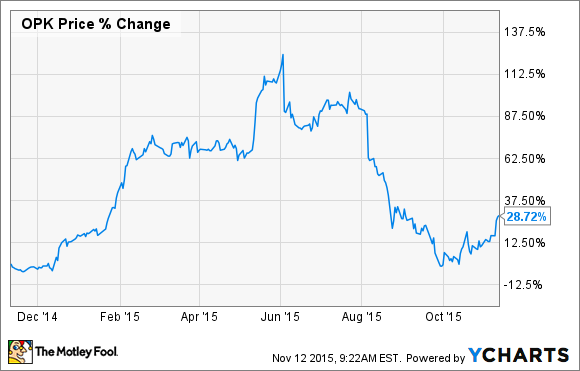 It now looks like the market is once again turning bullish -- shares have bounced back nicely following the company's third-quarter results earlier this week.

So, what was in the report that got the stock moving again? Let's take a closer look.

By the numbers
Thanks largely to its acquisition of Bio-Reference Laboratories earlier in the year, revenue for the third quarter exploded higher to $143 million, up substantially from the $19.8 million it reported last year. That result came in well ahead of the $136.5 million that analysts were expecting.

While the revenue beat was certainly exciting, the company's performance on the bottom line was even more impressive. Opko Health reported a net income (yes, income) of $128.2 million, or $0.25 per share during the period. That number blew away analyst estimates, as Wall Street was expecting the company to show a net loss of $0.01 per share.

Unfortunately, that profit might not be here to stay as it was owed to a large number of one-time events, including:

While the company also had a one-time payment of $25.9 million related to its Pfizer deal that offset those gains, investors should probably be curbing their short-term enthusiasm for the company's ability to continue showing huge profits.

Regardless, a profit is a profit, and when you mix these results with the upfront payment from its Pfizer deal, Opko's cash position ballooned to $212 million, even after offsetting the $94.7 million cash payment made to acquire EirGen during the quarter.

Beyond the numbers
Like any other company that has a significant amount of its market value tied up in its clinical pipeline, there was plenty of other information reported that investors need to digest.

First off, Opko has already begun to use the national presence of Bio-Reference Laboratories to its advantage. Opko now has a much bigger sales force on its side to push its 4Kscore personalized prostate cancer test out to more providers. Opko also announced that its 4Kscore test is now being recommended for use by the National Comprehensive Cancer Network Guidelines, which when combined with the larger sales force could certainly give this test a good chance at strong future growth.

Beyond its testing business, Opko's business partner Tesaro (NASDAQ: TSRO) launched Varubi on November 16. In September, Tesaro received FDA approval of Varubi, which is designed to help treat delayed nausea and vomiting associated with chemotherapy. This represents Tesaro's first drug approval, and if all goes well Opko could receive another $110 million of milestone payments plus ongoing royalty checks from the drug.

Meanwhile, the clock continues to roll along Opko's pending approval of Rayaldee for secondary hyperparathyroidism in patients with stage 3 or 4 chronic kidney disease and vitamin D insufficiency. The drug sports a PDUFA decision date of March 29, 2016, and if all goes well the company could be launching the drug as soon as the second half of 2016.

Turning to the collaboration deal with Pfizer, enrollment in a phase 3 trial for its growth hormone drug has now been completed, and the study is expected to conclude in the second half of 2016. The drug could be in regulators' hands by the end of 2016, and with an estimated market opportunity of $3.0 billion, this is certainly a drug for Opko Health and Pfizer investors to watch closely.

Now what?
Chairman and CEO Phillip Frost had a lot of good things to say about the quarter and has been buying shares hand-over-fist in the open markets recently. He summed the company's quarter quite nicely in the press release:

We believe that the Pfizer transaction for hGH-CTP and the acquisitions of EirGen and Bio-Reference Laboratories have had a positive impact on our financial operations and will provide significant revenue opportunities and an expanded commercial platform for us going forward.

All in all, I understand why investors in Opko are feeling bullish again, as the quarter had good news all around. While investors may not be able to bank on the company showing a profit every quarter from here on out, this company remains on sound financial footing and offers a slew of potential catalysts over the coming years. I'll be giving Opko's stock the green thumb in CAPS, and if its pipeline continues to progress it may find a way into my real money portfolio in the not too distant future.