Jason Hall, Daniel Miller, and Matthew DiLallo
(TMFVelvetHammer)
Author Bio
Born and raised in the Deep South of Georgia, Jason now calls Southern California home. A Fool since 2006, he began contributing to Fool.com in 2012. Trying to invest better? Like learning about companies with great (or really bad) stories? Jason can usually be found there, cutting through the noise and trying to get to the heart of the story. Follow @TMFVelvetHammer

What's better than giving a kid money? Giving them stocks, of course.

When asked what they would change about their investing decisions, one of the most common responses people give is "start sooner." And while we can't turn back time for ourselves, we can help the kids in our lives get an early start. Not only should this help them financially, but it's a great way to plant the seeds for a lifetime of financial well-being.

We asked three of our regular contributors to offer up a stock they see as a top choice to buy for a kid in your life. They gave us a century-old innovator in 3M Co. (NYSE:MMM), a technology company that's trying to upend the way we think about cars in Tesla Motors Inc. (NASDAQ:TSLA), and an athletic and connected fitness upstart in Under Armour Inc. (NYSE:UAA).

Daniel Miller
My selection to start my kid's portfolio would be a low-risk, well managed, diverse company with consistent value returned to shareholders. Few companies fit that description better than 3M.

3M has a crazy-good track record of returning value to shareholders, including paying dividends without interruption for nearly a century. Just look at the following graph, which shows how well 3M returns value by increasing its dividend and reducing its share count: 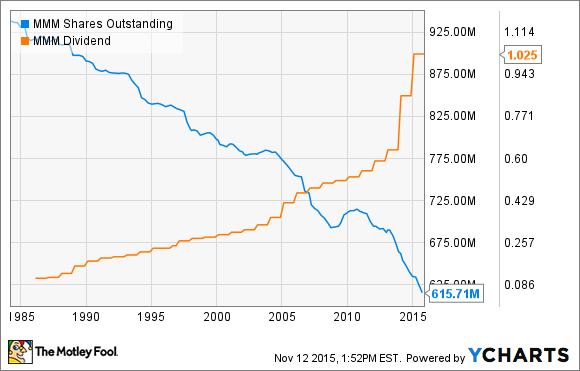 Beyond having a stable business portfolio that enables the company to provide investors with consistent dividend increases, 3M is working to narrow its focus and combine certain of its business groups. The benefits of moving from a portfolio with 40 businesses to one with 26 includes reduced costs, greater scale, and more focused marketing activities, while also accelerating the priority of remaining projects for research and development spending, which will be crucial for 3M to continue its history of success.

The near term looks positive for 3M, as its annual goals through 2017 include having free cash flow conversion of 100% or higher, return on invested capital of at least 20%, and organic revenue growth between 4% and 6% -- all fine objectives, and all objectives the company successfully achieved in 2014.

One big selling point for 3M in the long term is that even during rough times such as the recent recession, the company achieved a return on invested capital, or ROIC, above 17%. (ROIC indicates how effectively a company is using its money to create value for shareholders; a history of solid ROIC is good news for investors.) 3M isn't a high-growth business, but if you're holding for the long haul, there isn't a much safer option that offers plenty of value to be returned to your kid's portfolio.

Matt DiLallo
While I don't have any kids -- let alone grandkids -- one of the first stocks I'd buy for their portfolio would be Tesla Motors. What I like about buying Tesla for a young person is the combination of a compelling storyline and the treasure trove of future investment lessons that it provides.

I'll start with the story, which is founded on Tesla's potential to be a real winner in the fundamental shift from gasoline to electric cars. However, the story is more than just that foundation, because the company, according to its chief technology officer, JB Straubel, extends far beyond electric cars: Straubel sees Tesla as "an energy innovation company as much as a car company."  It's one reason that the company is involved with the design and development of energy storage systems as much as it is with vehicle design. That story, when combined with a visionary leader like Tesla's Elon Musk, is what great stock stories are made of. It's a story that could lead to outsize returns over the next few decades, with Tesla potentially becoming the driving force behind designing and building the car of the future.

If that story plays out and the stock turns into a big winner, then it would really provide a strong financial foundation for those kids. It would teach a valuable lesson that it only takes one or two great stocks to really make a difference. It just might get them interested in investing and would teach them the benefit of investing for the long term.

That said, even if Tesla fails, there's a story to tell and lessons to be learned. For example, digging into why it failed would help the kids avoid making those mistakes in their own life. Maybe Tesla takes on too much debt and that runs the business off the road. Maybe it misses the boat on some new technology and a rival speeds past. No matter what happens, there's a valuable lesson to be gained.

Either way, I think Tesla is one of those stocks that belongs in a young person's portfolio. If it fails, while the loss might be real, the lessons to be learned are still quite valuable. Meanwhile, a big win really sets them up better in life than they would have been otherwise.

Jason Hall
About 40 years ago, the athletic footwear and apparel world was turned on its head, and nobody noticed. I'm talking about the founding of Nike. At the time, the company's innovative new sole design for its running shoes was a big deal, but not outside the world of elite runners. It would take the company's steady development of new footwear for multiple sports, and the eventual signing of basketball legend Michael Jordan, for it to become an overnight sensation -- years and years after the company started innovating.

I think a similar thing is happening today with Under Armour. It started with the "charged cotton" T-shirt developed by company founder and CEO Kevin Plank, and it has continued across multiple product lines in the 15-plus years since. Today, that original innovation, along with the rest of the company's compression apparel clothing, is only a small part of a rapidly growing business.

The result has been a market-crushing return so far for early investors: 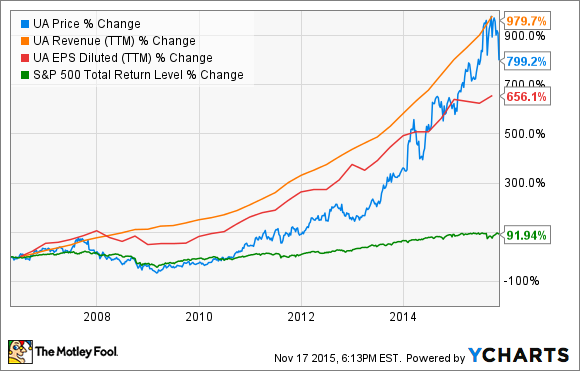 The thing is, Under Armour looks like it's just getting started: 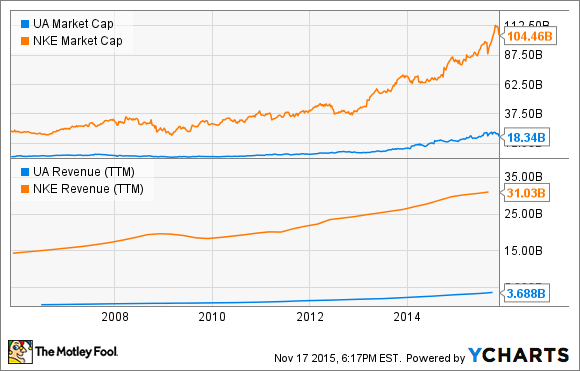 Simply put, there is a massive opportunity for the athletic apparel and footwear industry to grow, and Under Armour is on track to be a major player in that growth. Think about it this way: $100 invested in Nike exactly 35 years ago would be worth more than $50,000 today, including dividends.

The company's push into connected fitness could be a key driver to those kinds of returns. Today it's app-driven, dependent on mobile devices such as smartphones and watches to record workout data, but Plank is convinced that in a few years, technology will begin showing up in apparel and footwear. Under Armour is working to be a leader when this does happen.

In fairness, it's not reasonable to expect the kinds of long-term returns that Nike has produced, but it may not be as far-fetched as it seems. Even with a fraction of those kinds of returns, Under Armour could be one of the best growth stories of its generation. Exactly the kind of stock to buy a kid in your life.