Macau has been in a funk since the middle of last year when a corruption crackdown, frail Chinese economy, and weakness in the junket market combined to keep gamblers out of the region. So far in 2015, gaming revenue is down 35.5% and gaming stocks like Las Vegas Sands (NYSE:LVS), Wynn Resorts (NASDAQ:WYNN), and Melco Crown (NASDAQ:MLCO) have all struggled as revenue has fallen.

This week we learned that the Macau government doesn't have any plans to boost revenue and expects 2016 to be worse than 2015 has turned out to be.

Macau doesn't see an imminent recovery
Chief Executive of Macau Fernando Chui Sai gave a press conference this week, where he said that he expects Macau's government revenue to fall 12% next year. Since the government gets most of its revenue from gaming taxes, that implies a 12% drop in gaming as well. That's on top of the long decline you can see below. 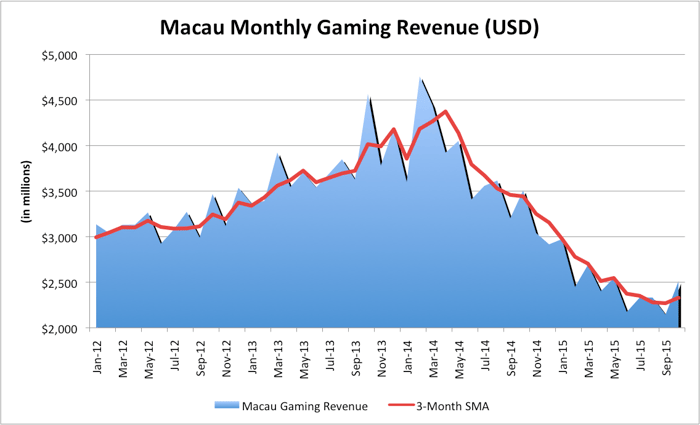 Macau doesn't have a terribly good history of accurately predicting gaming revenue, but comments surrounding the prediction could prove important for gaming companies. Sai didn't mention a change in visa rules that limit Chinese access to Macau and said it would try to diversify away from gaming. That could prove to be problematic for the industry.

The focus on non-gaming continues
As Wynn, Las Vegas Sands, MGM Resorts (NYSE:MGM), and Melco Crown open resorts that each is building in the Cotai region of Macau, they bring thousands of new hotel rooms and non-gaming activities to the region. That's exactly what the government wants.

But these casinos are still dependent on the existence of the casino to make money. That's why Melco Crown's table allocation to Studio City of 200 tables, increasing to 250 at the end of the year, was so concerning for competitors. That was less than half of what Melco Crown wanted and makes it uncertain if the resort will be able to turn a profit.

The allocation caused Steve Wynn to temporarily lose his cool on the company's most recent conference call, concerned that his $4 billion investment in the region won't make money if he doesn't get near 500 tables. Sheldon Adelson at Las Vegas Sands is somewhat insulated because he has four major resorts in Macau and could steal some for The Parisian when it opens if needed. And MGM Cotai won't open for another year, so it has time to let others take the lead in fighting for more gaming tables.

What's interesting about the government's comments is that it wants more non-gaming activities, but it isn't clear whether it will allow for enough gaming to fund the non-gaming activities that are being built. After all, the Bellagio fountains don't pay for the resort; the gaming tables do.

More uncertainty ahead
Investors may have been hoping for more bullish comments from the Macau government, but they aren't going to get them right now. And it looks like policy won't be favorable to gambling in the near future, either.

Long-term, these aren't bad signs for Macau because fewer junkets and more mass market visitors who spend money on non-gaming will create a more stable industry. But there's a lot of uncertainty in the meantime, and investors shouldn't expect a recovery in Macau gaming -- nor its stocks -- in the near future.