It's no secret that Samsung (NASDAQOTH: SSNLF) has fallen from smartphone glory as of late. The company is still one of the top phone vendors in the world when you factor in smartphone shipments, but a recent chart published by Statista shows just far Samsung's smartphone profits have slipped over the past few years.

The chart below shows that as recently as 2013 the company accounted for 40% of smartphone profits worldwide, while Apple (NASDAQ:AAPL) took about 60%. But now, Samsung makes up just 14% of worldwide smartphone profits, while Apple brings in an astounding 92% (side note: If you're doing the math, those two percentages equal more than 100% because many device makers either break even or lose money). 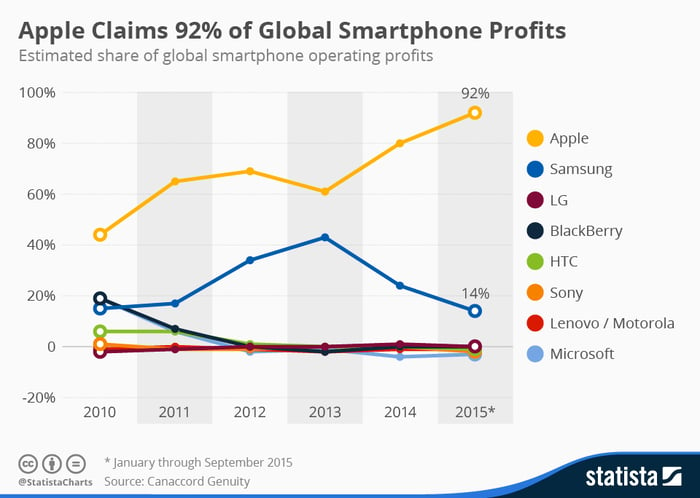 Samsung's smartphone position
It's not that Samsung has a problem getting smartphones into users' hands -- it definitely knows how to do that. In the third quarter of this year, Samsung shipped more phones than Apple and Huawei combined, and accounted for about 24% of all smartphone shipments worldwide. Apple, on the other hand, shipped just 13.5%.

But Samsung said in its third-quarter earnings report that while smartphone shipments and revenue increased, profits decreased. The drop came from consumers opting for Samsung's mid-range and low-end smartphones, which have lower average selling prices (ASPs).

The drop in profits in the third quarter wasn't a first; the company has felt the effects of consumers moving away from its higher-end devices for some time. Back in 2013, at the height of Samsung's smartphone dominance, the company's mobile division brought in nearly 66% of all the company's total revenue -- now it makes up just over 32%.

Samsung's dilema
To help in its battle against the iPhone, South Korea's Electronic Times reports that Samsung may bump up its launch of the upcoming Galaxy S7 from its usual March time frame to January. This would close the gap between the Apple iPhone 6s launch and the S7 debut, so that consumers wouldn't have to wait around if they're considering an S7 purchase.

Adjusting the time may help Samsung a bit, but of course it won't solve the company's smartphone woes. Samsung's major problem right now is that when users want a high-end device, they're choosing an Apple iPhone. And at the same time, mid-range and low-end Android devices are competing pretty well with Samsung's high-end devices.

This has led some to make some bold predictions that Samsung might abandon the smartphone market altogether in the next five years. Here's what Ben Bajarin from The Daily Techpinion wrote a few weeks ago:

Samsung is suffering from 'The Innovator's Dilemma'. There is absolutely nothing they can do to fix the downturn in their premium handsets. No amount of innovation will save them because the 'good enough' mind-set has settled into Android land.

He went on to say:

Android's new premium price point is between $300-$400 and the new mainstream Android smartphone price point is under $300. No other Android OEM, Samsung included, will sell in volume anything above those prices. At those prices, cutting edge innovation will be void, meaning the gap between iPhones and Android will grow.

Samsung isn't just losing the smartphone profit battle to Apple, it's also losing the overall smartphone war. Android device makers are creating phones that are much cheaper than Samsung's high-end devices but still very comparable. I think it's still a bit too early to say Samsung can't bounce back, but it'll need more than a few tweaks to its Galaxy S lineups to bring its mobile profits back up. And with Apple's dominance of smartphone profitability having no end in sight, the clock is ticking for Samsung.