A sky high-yield can often be a red flag that a company's payout may be too good to be true. Then again, the worst oil crash in decades can also create immense long-term income generating opportunities. Let's look at three reasons KNOT Offshore Partners (NYSE:KNOP) is one such opportunity and, more importantly, how Wall Street's mistake can greatly benefit your portfolio in the years to come, even if oil prices remain in the doldrums.

KNOT Offshore Partners had a great quarter. Three dropdowns over the past year increased its fleet size 43%, fueling strong growth in sales, profit, and, most importantly, the DCF that funds the quarterly distribution.

On Oct. 15, KNOT Offshore purchased the Ingrid Knutsen, its 10th tanker, from its sponsor for $115 million. The vessel is charted by a subsidiary of ExxonMobil through Q1 of 2024, with two options to extend that period to 2029. This latest dropdown adds $238 million to KNOT Offshore's backlog, which has grown to $863 million, with an average remaining charter contract duration of 5.8 years.

Payout is far safer than Wall Street believes
Arguably, payout sustainability is the most important part of a distribution profile, since unit prices typically rise or fall alongside an MLP's payout. Based on KNOT Offshore's 15% yield, investors have very little confidence in the MLP's ability to sustain its distribution or grow it in the future.

However, such assumptions may not be warranted. KNOT Offshore operates both in the oil and shipping industries, which are some of Wall Street's most hated sectors right now. However, its business model is in no way like that of struggling oil producers or dry-goods shippers that have seen prices for their products or services collapse catastrophically in recent years. The fact is that KNOT Offshore Partners is, In the words of CEO John Costain, "in essence, a midstream mobile pipeline business with fully contracted revenue streams. ...There is, therefore, no commodity risk." 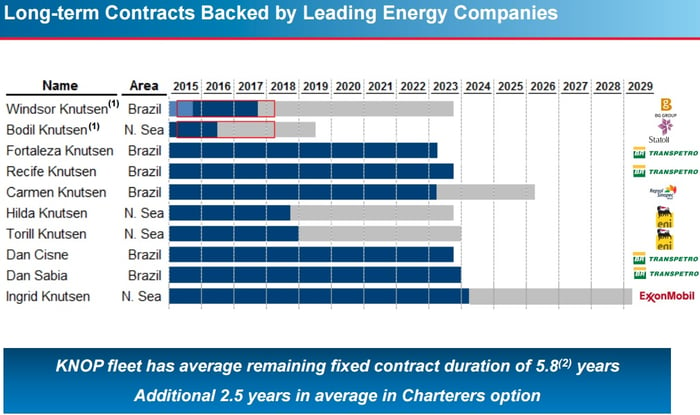 KNOT Offshore's cash flow is highly secure, backed by long-term fixed rate contracts with some of the largest oil companies in the world, such as ExxonMobil, Statoil (NYSE:EQNR), and BG Group, which will soon be owned by Royal Dutch Shell. The same holds true for the future dropdown pipeline of tankers, which provide the opportunity to grow its fleet 50%.

Despite the worst oil crash in a generation, big oil companies continue to invest in the most attractive offshore opportunities, and that means continued strong demand for this niche midstream sector. For example, BG group is currently investing heavily in offshore Brazilian oil production, where breakeven prices remain below $40 per barrel.

Similarly, Statoil continues to see potential in North sea oil production. In fact, Statoil recently decided to invest over $7 billion in the Mariner oil field and is thinking about investing in the Bressay field as well. Combined, these two projects would likely result in 195,000 barrels per day of production and generate demand for five shuttle tankers.

Risks to be aware of
Should oil prices remain low for several years, then shuttle tanker charter rates will continue to decline, as they are slowly doing now. For example, Repsol Brasil, a subsidiary of Sinopec, recently extended its contract for one of Knot's tankers by five years to 2023 in exchange for a 6.2% reduction in charter rate.

Meanwhile, KNOT Offshore's current unit price is potentially too low to raise equity growth capital to buy the five dropdown tankers from its sponsor without excess dilution that could slow future distribution growth.

Debt financing could also prove a challenge, given KNOT Offshore's existing $611 million total debt load and current liquidity of $87.2 million. Given KNOT's 6.6 debt-to-EBITDA ratio, lenders might only be willing to extend additional loans to perhaps buy one additional tanker.

Bottom line: Wall Street has KNOT Offshore Partners' business model all wrong
There doesn't seem to be any justifiable reasons why KNOT Offshore Partners should be trading at a 15% yield. Yes, plunging oil prices have had a small negative effect on shuttle tanker charter rates. However, based on the small magnitude of these declines thus far, KNOT Offshore's long-term contracted, fixed-fee midstream business model, and its sustainable coverage ratio, I think the probability of a distribution cut over the next few years is far lower than what Wall Street is currently pricing into the MLP.