The stock market has practically been an unstoppable force since bottoming out in March 2009. Despite a lot of stocks heading substantially higher, healthcare stocks, especially those of drug developers, have been particular standouts.

Short-sellers pile on Big Pharma
However, the last couple of months haven't been too kind to Big Pharma. The Market Vectors Pharmaceutical ETF, which counts around 25 pharmaceutical companies in its basket of owned stocks, is down 15% from its highs set during the summer. As healthcare stocks hit the skids, short-sellers began piling on. But that may be about to change as you'll see below.

Short-sellers are typically short-term investors looking to profit from the downward movement in stock prices. Most investors are familiar with the idea of buying and holding a stock: If it goes up in value, you make money, and if it drops in value, you lose money. For short-sellers, this is flipped -- a falling stock means profits, whereas a rising share price is bad news.

But short-selling also comes with notable risks. When buying a stock, your gains are, in theory, unlimited, whereas your losses are capped at the amount you invest (a stock can't go below $0). Gains for a short-seller are capped at 100%, whereas their losses are theoretically unlimited. Short-sellers also can't bet against a stock without having a margin account (i.e., borrowing money from their brokerage), meaning they'll also pay interest on their "loan." 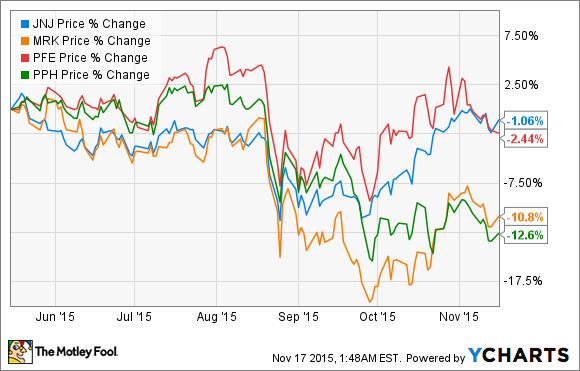 A sentiment shift is afoot
Since the summer, short-sellers have witnessed some pretty nice gains, but one of the most widely followed metrics is now signaling that it could actually be time to buy Big Pharma stocks.

A quick glance at the short positions held by pessimists as of Oct. 30 yields quite the surprise for some of Big Pharma's largest players. Pfizer's shares held short fell by 20.6 million, or 29%, from Oct. 15. Similar large drops were witnessed in Merck and Johnson & Johnson, where there were net reductions in shares held short of 10.2 million (27%) and 5.9 million (17%), respectively.

This drop in short interest is noteworthy because it signals that fewer traders are betting against these Big Pharma names. If there are fewer bets to the downside, the implication is that it could cause share prices for these, and other, Big Pharma stocks to move up.

Why the sudden shift in investor sentiment toward Big Pharma? It probably boils down to a couple of reasons.

First, Big Pharma earnings came in considerably better than Wall Street had expected in the third quarter. It's admittedly taken some digging to get an apples-to-apples comparison for some Big Pharma stocks since a stronger U.S. dollar, acquisitions, and divestments have made it tough to tell whether companies are growing or slowing on an operational basis. When it comes to Pfizer, Merck, and Johnson & Johnson, all three showed a reduction in revenue on a year-over-year basis. Yet, when we looked at apples-to-apples operational growth, all three grew in Q3 2015 from the prior-year period. All three also topped Wall Street's EPS expectations.

Secondly, concerns about the patent cliff are largely disappearing thanks to recent successful drug launches. Pfizer's Ibrance, a breast cancer treatment that doubled progression-free survival in clinical studies, is doing a good job of helping shareholders put Lipitor's patent loss from earlier this decade in the rearview mirror.

Merck's cancer immunotherapy Keytruda rang up $160 million in sales in its latest quarter, and the company just last month announced that the Food and Drug Administration expanded the labeling of Keytruda to advanced non-small cell lung cancer patients expressing high levels of PD-L1.

Third, concerns about prescription drug reform have died down a bit since late September, when privately held Turing Pharmaceuticals jacked up the price of Daraprim by nearly 5,500% overnight. Pfizer, Merck, and J&J are all involved in oncology research, and the cancer care space is known for its five- and six-digit annual wholesale costs. Any proposed changes to the way drug developers price their products could adversely affect profitability. The simple fact that Congress has chosen to pick just a few battles within the sector, rather than go after the entire industry, bodes well for drug developers as a whole.

Finally, the lack of a lending rate increase in the Federal Reserve's October meeting kept rates near their historic lows, spurring Big Pharma companies to consider M&A deals. Mergers and acquisitions have been a vital source of growth for mammoth drug developers, and ongoing cheap access to capital compared to historic levels is likely to spur Big Pharma companies to continue looking at how M&A can be used to their benefit.

Keep this important point in mind
Although short-sellers have been running away in droves from Big Pharma stocks, you'll want to keep one thing in mind before you yourself consider buying in. Remember that short-sellers often have short-term motives, so their actions may not be an indicator that should greatly influence your long-term investment thesis. Don't get me wrong: A long-term look at short interest for a stock can be helpful. However, a change over a two-week period in Big Pharma short interest shouldn't be the only metric you consider when evaluating this sector for investment.

Ultimately, deciding whether to invest in Big Pharma is going to require a thorough analysis of any prospective company's business model and long-term outlook. Short shares held is just one of many metrics that long-term investors can use to help put the puzzle pieces together.