Earlier this year, FCC documents revealed iRobot Corporation (NASDAQ:IRBT) is pursuing plans to build a robotic lawn mower. But apart from knowing such a product could go a long way toward helping iRobot diversify revenue generated by its home robot business, investors had little supplementary information to quantify the size of this potential new market.

Rather, iRobot's initial documents suggested robotic lawn mowers are already "well accepted in Europe," where they represented a respectable $200 million market in 2014. But that market remains crimped both there and in the U.S., iRobot argued, as today's robotic lawn mowers require the costly and inconvenient installation of underground electric fences to mark navigational boundaries. That's why iRobot asked for -- and subsequently received -- permission from the FCC for technical clearance to use much more convenient wireless beacons placed in the yard to establish boundaries for its own robotic lawn mower.

Move over, Roomba?
So with the patio door to millions of consumers' lawns now wide open, iRobot management took advantage of the recent 2015 Analyst Day to provide valuable insight for investors to gauge the potential of the robotic lawn mower market.

Specifically, according to iRobot's calculations, home robots for the lawn represent a roughly $4.6 billion annual market at retail: 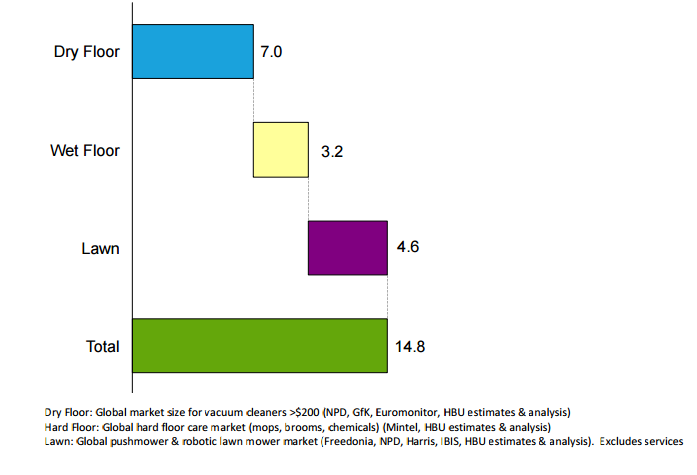 So what does this mean relative to iRobot's current business?

At its current annual run rate, then, Roomba commands a mere 7% of the total addressable dry floor market. If iRobot is able to eventually reach that level of market penetration in the above described $4.6 billion lawn segment, it would represent a $322 million annual top-line boost, equivalent to over 50% of iRobot's total sales this year.

Of course, it will take time to realize that potential. As its request to the FCC indicates, iRobot's robotic lawn mower is still in the early stages of development and likely won't see the light of day for a number of years. We should also keep in mind Roomba's current strength took more than a decade to foster; iRobot's latest Roomba 980 model, for example, was introduced exactly 13 years after the first Roomba hit the market in 2002. To be fair, though, iRobot's supply chain and distribution network have grown by leaps and bounds since then and so could enable it to secure robotic lawn mower market share at an accelerated pace.

Think (even) bigger
But things get even more exciting on a broader scale. According to iRobot, the annual retail value of the global lawn care market including lawn care and mowing services is just over $38 billion. Within that, the United States alone represents the vast majority at more than $25 billion: 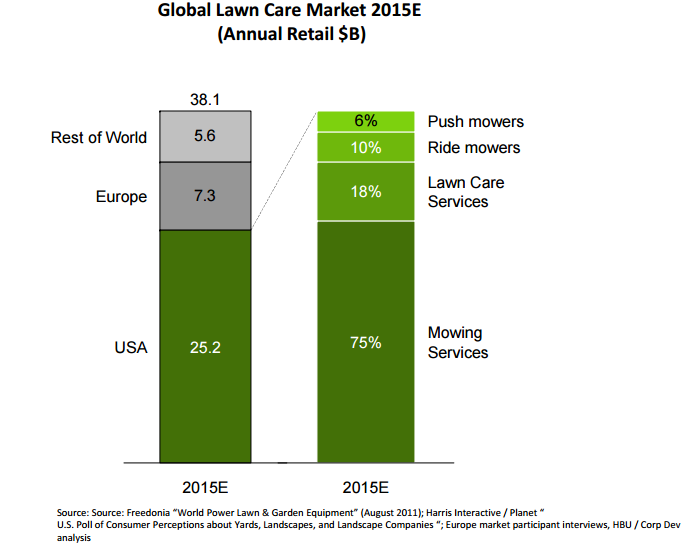 So why does this matter? As iRobot senior VP Christian Cerda, inserting robotics into the lawn care market makes things slightly more complicated:

When we think about a robotic solution, it's not only replacing the appliance, or the mower. It is also replacing some of the labor that goes with it. We don't venture into exactly knowing how much of that labor [...] this future robotic lawn industry will be able to capture, but we know that the base to capture is quite big.

Cerda was also quick to confirm that iRobot's robotic lawn mower efforts remain in their infancy, but he insisted that they remain well positioned to implement the right solution to introduce robotic lawn mowing to the masses. If one thing is sure in the end, it's that if iRobot is able to leverage its technology expertise and successfully break through into this multibillion-dollar market, it could have a massive positive impact on its top and bottom lines.