What: Shares of eye-disease-focused Ocata Therapeutics (NASDAQ: OCAT) posted a huge 88% gain during the month of November after the company accepted a buyout offer for a healthy premium, according to data from S&P Capital IQ. 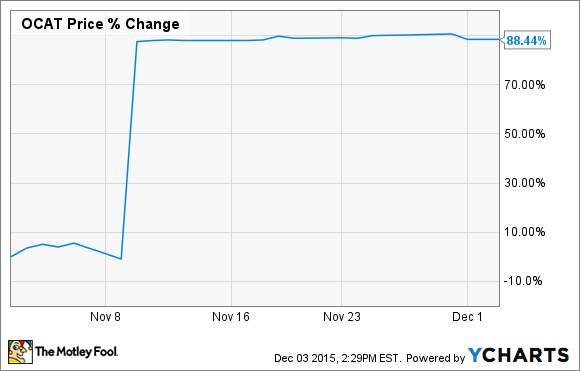 So what: Early in the month, Ocata accepted a takeover bid from Astellas Phama (OTC:ALPMY) for $379 million, or $8.50 per share, which represented a healthy 79% premium to its November 6th closing price. Astellas Pharma's and Ocata Therapeutics' boards of directors have both unanimously blessed the deal, and Astellas Pharma will be completing the transaction with cash.

Now what: Ocata's pipeline is focused on diseases of the eye, like Stargardt's Disease and Dry Age-related Macular Degeneration. Although Ocata has yet to start a phase 3 trial, Astellas clearly likes what it has seen so far, and has made the decision to bring Ocata research capabilities into the fold.

We're confident that we will turn innovative science into value for patients through the creation of new value by combining both companies' capabilities under "One Astellas," where Ocata will be taking a key role in Astellas' R&D in ophthalmology and cell therapy.

I am impressed by the vision and commitment of Astellas and believe that with their global resources behind our regenerative platform, patients suffering from debilitating diseases like AMD and SMD will soon benefit from having access to regenerative medicine.

Ocata, which began its public life under the name Advanced Cell Technology, has been a terrible stock to own for years, so its long-suffering investors at least got some of their money back after this deal was announced.

Ocata has spent the majority of its public life in penny-stock land, and its management team even went so far as to execute a one for 100 reverse stock split last year in an effort to bring its shares to investors' attention. However, this stock was trading for so little, that even after the split occurred, its shares were still trading in the $3 range.

Investors in Ocata would probably be wise to lick their wounds, and look to reinvest their proceeds in more promising names.