The reprieve given clothing retailer Gap (NYSE:GPS) following its mixed-bag third-quarter earnings report last month may already be cooling off. Despite falling sales, lower profits, and reducing its full-year guidance, the market sent the retailer's stock surging 7.5% higher as analysts said they saw reason for hope.

While the Gap brand and its sister Banana Republic stores continue to limp along, reporting falling year-over-year sales, the Old Navy discount brand has become the sole bright spot for the retailer, with higher sales and profits. Because Gap CEO Art Peck is in the midst of converting the two ailing brands to fast fashion-like houses just as the company did with Old Navy, he's asking investors to give him and the company time for the transformation to be completed. 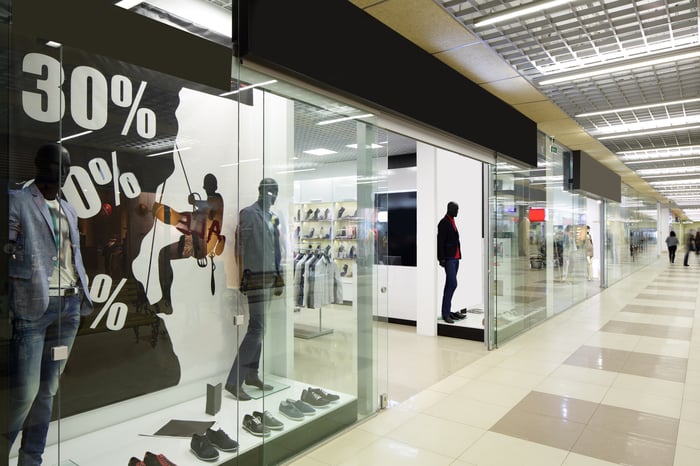 "Old Navy delivered another consecutive quarter of growth," he said in a statement announcing the retailer's earnings. "Gap has made clear progress on its transformation agenda and we look forward to introducing customers to the brand's spring collection, which embodies elevated American style."

Here's hoping the retailer can make it that long.

Net earnings tumbled 29% to $248 million, or $0.61 per share, in the quarter, down from $351 million, or $0.80 per share, a year ago. Revenues were down 3% to $3.86 billion. And though currency exchange rates played a part in the decline, it amounted to only about $100 million; the rest was just consumers turning their backs on the retailer in favor of clothes offered by trendsetters H&M (OTC:HNNMY) and Forever 21, and even American Eagle Outfitters (NYSE:AEO), which saw third-quarter earnings beat analyst expectations as same-store sales grew 9% from last year.

Look at how that stacks up against Gap's comps performance:

Comparable-store sales are an important retail metric because they strip out growth achieved simply by opening new stores. The results at Old Navy are key because that's what Peck is basing Gap's entire turnaround strategy on: becoming more like those fast-fashion houses that take designers' clothes off the runway and get them onto store shelves in just weeks, rather than months.

It's not an easy transition, either. Although everyone these days seems to say they're adopting the fast-fashion ethos, even including stodgy department stores like Kmart and J.C. Penney, there is more to it than just announcing a plan to turn over styles and inventory more quickly. There is a sea change that needs to occur in sourcing and inventory management that requires a new way of thinking.

Abercrombie & Fitch (NYSE:ANF) sought to implement a fast-fashion sense at its Hollister store, but it took the teen retailer a long time to make a difference. This past quarter was the first quarter in four years that the brand posted positive comparable sales.

Even though Gap has seemingly transitioned its Old Navy stores without a hiccup as it has been the only brand since 2013 that's been able to post positive comps, Peck is counting on similar gains being made at both Gap and Banana Republic.

He estimates Old Navy has gained $1 billion in market share over the past three years due to the transformation, so by implementing those same operational processes at the other two stores, it can achieve a similar turnaround for investors. But he better hurry as fast fashion may have peaked.

H&M is expanding into makeup as its sales growth slows and Uniqlo is putting the brakes on expanding in U.S. malls. And American Eagle Outfitters is showing there's a different path that can be trod to effect change without having to follow the fashion herd into fast retailing. It's going upscale instead.

In an environment where consumers are proving to be especially cautious with their spending, any direction a retailer goes is fraught with risk. Gap's more upscale Banana Republic shows there's no guarantee that route will work.

But with sales still in free fall everywhere except at Old Navy, Gap needs to hurry up and successfully implement those changes companywide if it hopes to regain any sales momentum.

Gap Inc. Better Hurry and Do This Before It Collapses @themotleyfool #stocks $GPS $HNNMY $AEO $ANF Next Article
Current