Image by Pictures of Money via Flickr Creative Commons.

After back-to-back weeks of posting market-beating gains, healthcare stocks as a group took a collective step back this week. Many of the most popular healthcare ETFs severely lagged the returns of the S&P 500 last week, and some performed downright awfully.

The group did so poorly that the best-performing ETF of the bunch, the iShares U.S. Healthcare Providers ETF (NYSEMKT:IHF), still managed to lose to the broader market index by 0.21% for the week. At least that was much better than last week's best performer, the SPDR S&P Biotech ETF, as that ETF shed more than 3% of its value during the time period, and that was after rallying more than 2% on Friday. 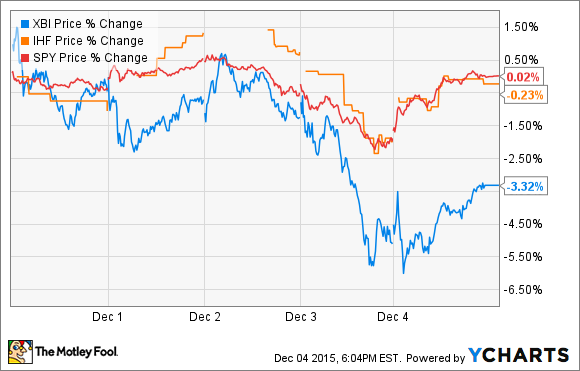 So why was the iShares U.S. Healthcare Providers ETF able to largely sidestep the selloff last week?

Cracking it open
As its name implies, the iShares U.S. Healthcare Providers ETF invests its funds in shares of companies that provide various healthcare services. A quick glance at the fund's sector exposure is telling of its investing style: 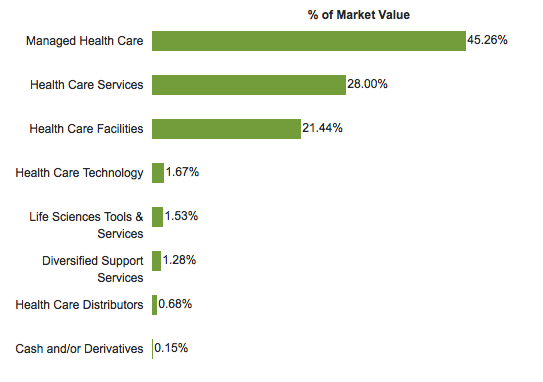 Health insurers make up a sizable portion of this ETF's assets, followed closely by companies that specialize in heathcare services and those that own or operate healthcare facilities.

Top holdings
This fund offers its investors instant diversification in the healthcare sector. It currently counts 53 companies in its mix. However, unlike other ETFs that use an equal-weighed strategy, this fund is fairly heavily concentrated in just a few names. In fact, its top 10 holdings comprise more than 58% of its assets.

So which of these stocks helped the fund perform so well this week?

What went right this week
While several of the fund's top holdings ended the week higher than they started, the largest gains this week came from Cigna (NYSE:CI) and UnitedHealth Group (NYSE:UNH). Both companies ended the week up much more than the market, and since they both represent a sizable chuck of the fund's total assets, they helped the entire fund to avoid the healthcare selloff. 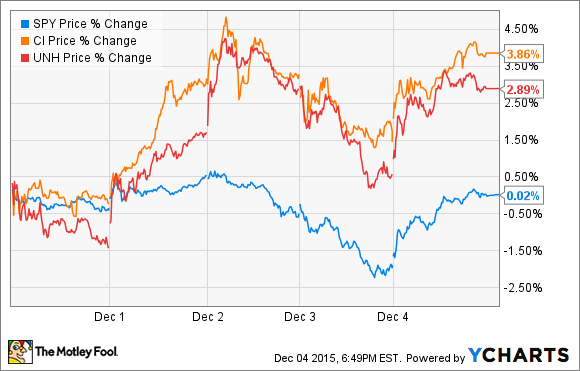 Both Cigna and UnitedHealth Group appear to be rebounding nicely from the beating they took a few weeks ago. At the time, a huge number of health insurance stocks were being sold off as news broke that UnitedHealth Group was experiencing earnings pressure from its individual exchange-compliant products,  which the company had introduced to the market after the Affordable Care Act -- also known as Obamacare -- went into effect. The company let its investors know that it was considering terminating its exchange plans altogether, as enrollment and pricing were both coming in below its expectations.

At the time, that warning managed to spook investors, and many health insurers fell off hard. Fast-forward two weeks, and investors appear to have shaken off the news.

Cigna stock jumped higher after news broke that Anthem (NYSE:ANTM) shareholders approved the pending acquisition of the fellow health-insurance giant. With one more hurdle cleared, the $48 billion transaction now only has to get a nod from regulators to be completed, and if all goes well, Anthem expects to bring Cigna under its wing by the second half of 2016.

Can the IHF continue to win from here?
Like many other healthcare-focused ETFs, the iShares U.S. Healthcare Providers ETF has proved itself to be a terrific long-term investment, as it has walloped the returns of the S&P 500 since it first began trading years ago. 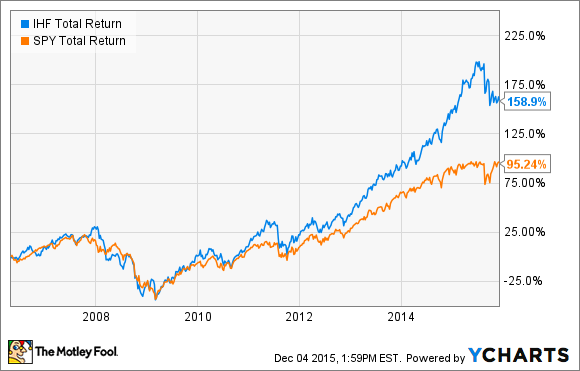 While this ETF is a bit less flashy than other healthcare ETFs, this fund's concentration in health insurers and hospital stocks should keep its volatility down, which could make it a solid choice for less risk-tolerant investors who are looking to beef up their healthcare exposure. The IHF also charges a modest expense ratio of only 0.43%, which makes it an inexpensive and lower-risk way to play the graying of America.