Last week, discount warehouse giant Costco Wholesale (NASDAQ:COST) reported solid sales results for Q1 of its 2016 fiscal year. Revenue rose 1.3% year over year to $26.63 billion on a 1% decline in comparable sales. Excluding the negative impacts of gasoline price deflation and the strong dollar, comp sales were up 6% for the quarter.

The strong adjusted comp sales performance didn't translate to higher earnings, though. After beating analysts' earnings expectations in every quarter of the 2015 fiscal year, Costco started the 2016 fiscal year on the wrong foot with an earnings miss.

Costco didn't provide an in-depth explanation of its Q1 earnings performance. (More details will come on the company's upcoming earnings call.) However, it's possible to glean some tidbits of information.

Membership income rose 1.9% year over year -- slightly faster than revenue -- providing a modest margin tailwind. The strong dollar has been weighing on Costco's membership revenue lately, just as it has been cutting into overall revenue growth.

Gross margin rose to 11.29% last quarter from 11.03% a year earlier. However, this gain was offset by an increase in selling, general, and administrative costs from 10.26% of revenue in Q1 last year to 10.54% last quarter. These increases were probably both caused by falling gas prices, as has been the case in other recent quarters.

The high pre-opening expenses, increase in interest expense, and higher tax rate are all factors that have nothing to do with Costco's underlying earnings power. Without these headwinds, the company would have kept its profit margin roughly flat year over year and posted modest earnings growth.

No real cause for worry
Before the earnings release, Costco shares ended Tuesday at a record high closing price of $168.87. Costco has posted a total return of 23% over the past year, whereas the S&P 500 has been roughly flat. As a result, it wouldn't be surprising if Costco stock pulls back in the next few weeks. 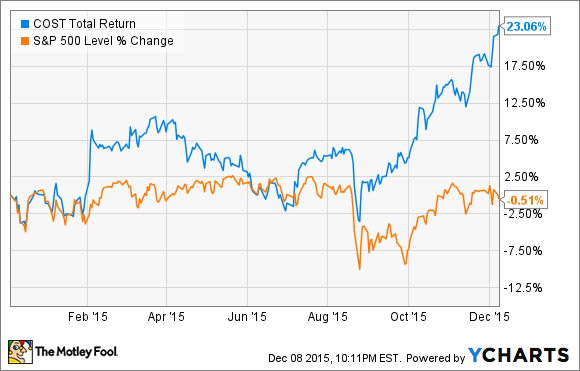 Long-term investors shouldn't be worried, though. Costco is a low-margin business, so relatively small changes in the timing of expenses can have a big impact on its reported earnings. These fluctuations typically don't have any impact on its long-term growth trajectory, though.

Costco has plenty of earnings growth catalysts ahead. These include a new credit card deal that will reduce its swipe fees, a potential membership fee increase next year, and its ongoing global expansion and market share growth. Costco investors can afford to be patient.