Please ensure Javascript is enabled for purposes of website accessibility
Log In Help Join The Motley Fool
Free Article Join Over 1 Million Premium Members And Get More In-Depth Stock Guidance and Research
By Jeremy Bowman - Dec 9, 2015 at 10:00AM

The bread distributor sold off after a weaker-than-expected earnings report but still looks like a solid long-term bet.

What: Shares of Flowers Foods (FLO -0.58%) were looking stale last month, falling 13% according to data from S&P Capital IQ. The stock dove following an underwhelming earnings report on Nov. 11 and stayed down for the rest of the month as the chart below shows. 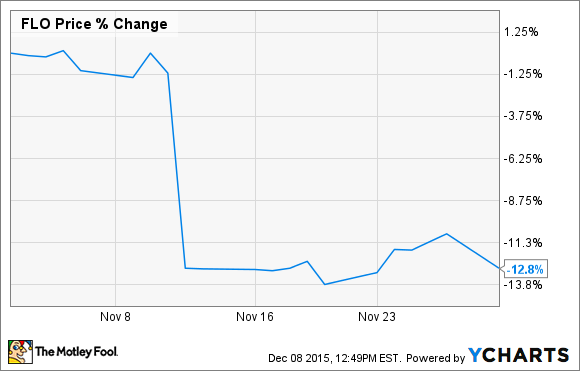 So what: The parent company of household brands like Wonder Bread and Tastykake posted earnings per share of $0.23, a penny short of estimates. Sales increased 4.8% to $885 million, and Flowers acquired organic bakery Dave's Killer Bread during the quarter. In the early fourth quarter, the company also purchased the Alpine Valley Bread Company, strengthening its position in the organic market.

What also seemed to cool off the stock after the earnings report was the company's lowering its full-year EPS guidance from $0.96-$1.01 to $0.96-$0.98. However, Flowers seems to be positioning itself well for growth over the long term. It also continues to expand organically as well as it opened a new bakery this year in Lenexa, Kansas.

Now what: Flowers Foods now reaches 83% of the U.S. population through its Direct Store Distribution, giving it a formidable position in the bread market. While the company is not going to see fast growth anytime soon, its brand portfolio and distribution network puts in a similar position to food and beverage giants like Coca-Cola and Pepsico, though it's much smaller at a market cap of just $4 billion. Expect the company to continue to make acquisitions to move into the expanding organic market as it adjusts to the Americans' changing tastes.

Earnings growth will be slightly muted this year as the company works to integrate its new acquisitions, but analysts expect an 11% bump in EPS next year. With steady future growth expected and a solid dividend at 2.6%, Flowers should continue to be a solid winner for shareholders.

Why Flowers Foods Is a Retiree's Dream Stock