The stock market has been practically unstoppable since March 2009, roughly two months after the U.S. economy officially exited the Great Recession. The S&P 500 (SNPINDEX:^GSPC), the broad-based index that's the best representation of the health of the U.S. stock market, has risen by more than 200% since its recession lows, and despite a few minor hiccups has demonstrated few signs of slowing.

On the flipside, falling commodity prices can also suggest a glut of supply for one or more commodities triggered by a slowdown in demand. Oil, for instance, has plunged by more than 60% from its recent highs. Lower oil prices are great for consumers at the pump, and lower prices are boosting profits for the airline industry, where fuel is a large expense. However, plunging oil prices also suggest that global demand is weak, that the underlying market dynamics aren't in balance (i.e., that there's far too much supply), and that jobs could be on the line if pricing weakness extends much further.

Of course, this isn't just an oil market problem. Silver, copper, natural gas, molybdenum -- basically any commodity you can think of, is well off of its highs. A slowdown in growth in China is partly to blame, but there are other regions and countries -- Russia, Brazil, and Europe as a whole -- struggling to move their GDP needle.

In sum, falling commodities across the board may be a good indicator of an impending recession.

2. Top-line beats are getting harder to come by
One of the reasons the stock market rally has lasted so long is that companies have consistently grown their revenue and profits since the recession. Even more importantly, S&P 500 companies have regularly topped Wall Street's forecasts. But the times may be changing.

According to a FactSet Earnings Insight release from this past week, earnings growth for the S&P 500 is expected to decline 4.3% in the fourth quarter. Assuming a decline is reported, which would primarily be traced to the decline in commodity prices in the energy sector, it would be the first time since 2009 that the companies comprising the S&P 500 would collectively suffer an earnings decline in three consecutive quarters. Additionally, more than three times as many S&P 500 companies (83) have issued negative EPS guidance for the fourth quarter than have issued positive EPS guidance (26).

However, it's not just underlying profits that are an issue -- sales growth is also underperforming expectations. In the third quarter, 74% of reporting S&P 500 companies topped Wall Street's lowered EPS expectations, but a mere 45% beat the Street's sales estimates. The implication is that growth is getting tougher to come by, and companies in greater numbers are turning to cost-cutting and share repurchase programs to buoy their results. While these have been effective in buoying EPS, they aren't sustainable long-term strategies.

3. History says we're due
Finally, history suggests that we're due for a recession. Since 1836, the U.S. economy has undergone 38 separate recessions of varying length. If going back that far is a bit too much for your tastes, then we've had 14 recessions since the Great Depression began in 1929. In other words, using the very long-term data, we tend to have a recession every 4.7 years, whereas the data since the Great Depression suggests we have a recession every 6.1 years. 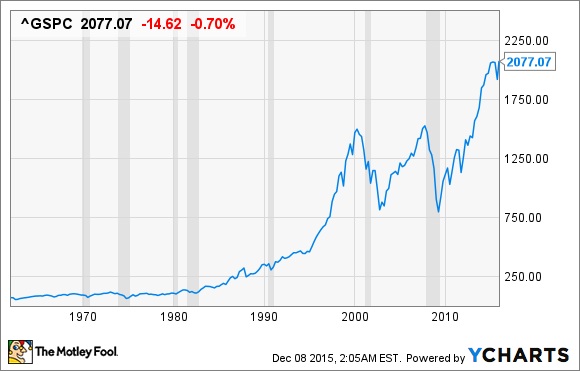 Where are we now? Our last recession ended nearly seven years ago (January 2009). It's important to note that recessions don't come about based only on historical patterns -- but these data points do serve as a general guideline that helps us ballpark when the U.S. economy may begin to cycle down again.

What should you do?
Now that we've examined these tell-tale signs of a recession, you might be wondering what you as an investor should be doing. The simple answer: nothing.

In theory, the recession-trough-expansion-peak cycle shouldn't alter your investment strategy much, if at all. As long as you're buying high quality, dividend-paying businesses, there's not much incentive for you to run for the exit. Not to mention that it's also impossible to precisely time peaks and troughs over the long run with any accuracy. If you miss even a handful of the S&P 500's best days, your long-term returns could be substantially lower.

If anything, the one move you may want to consider making is to take a close look at your investment thesis in riskier high-growth stocks. Businesses that aren't on solid footing, and which have benefited most from an expanding U.S. economy, are the likeliest to be hit hard during a recession. If your investment thesis in these stocks is still strong, then perhaps no alteration is needed. If, however, your investment thesis has weakened or is broken, it may be time to reconsider and sell your higher-risk stock(s).