Jason Hall, Rich Smith, and Adam Galas
(TMFVelvetHammer)
Author Bio
Born and raised in the Deep South of Georgia, Jason now calls Southern California home. A Fool since 2006, he began contributing to Fool.com in 2012. Trying to invest better? Like learning about companies with great (or really bad) stories? Jason can usually be found there, cutting through the noise and trying to get to the heart of the story. Follow @TMFVelvetHammer

3D printing, solar power systems, and even electric vehicles have been around for decades. However, it's only been in recent years that innovations and improved technologies are finally bringing these once-niche ideas out into the mainstream.

And while these industries represent the best of innovation and a better future, picking the best investments is no easy task -- just ask anyone who's invested in 3D printing or solar companies over the past few years. With that in mind, we asked three of our contributors to each give a little insight into these industries and why it could be the best place to invest going forward.

Rich Smith
3D printing, solar, or EVs? Talk about a dilemma! 3D Systems (NYSE:DDD) and SolarCity, the two poster children for 3D printing and solar power, respectively, both sell for P/E ratios of infinity -- a consequence of neither company having yet figured out how to turn a truly revolutionary idea into a very mundane profit.

For that matter, the flagship of the EV industry, Tesla Motors, isn't doing much better. Elon Musk's baby isn't expected to earn a full-year dime before 2016 -- and even then, the stock costs so much already that its forward P/E ratio is well into the triple digits.

Gun to my head, though, if I had to pick the one industry out of these three that's likely to become a good investment, I'm going with electric vehicles. The reason is that while pretty much everywhere in 3D printing all the major players are losing money and burning cash, and the same is true in solar, in the automotive industry there's at least a history of companies putting the profit motive ahead of just pursuing whiz-bang technology for its own sake.

Maybe Musk won't turn a profit at Tesla. (I actually kind of doubt he will.) But I see at least a chance that a well-grounded company like Nissan or General Motors -- companies that have historically shown at least some interest in earning profits -- will eventually introduce an EV that sells for a price low enough to attract consumer interest, but high enough to generate a positive profit margin.

Mind you, even here, the profits won't be soon in coming; $40-a-barrel oil is going to hobble the EV industry for a good long while. But oil prices always go up after going down. Give it a year or two and raise the price of a gallon of gas a dollar or two, and folks will be lining up to buy electric cars again.

Adam Galas
In my opinion, investing in the massive potential of solar is a growth investor’s best long-term opportunity. 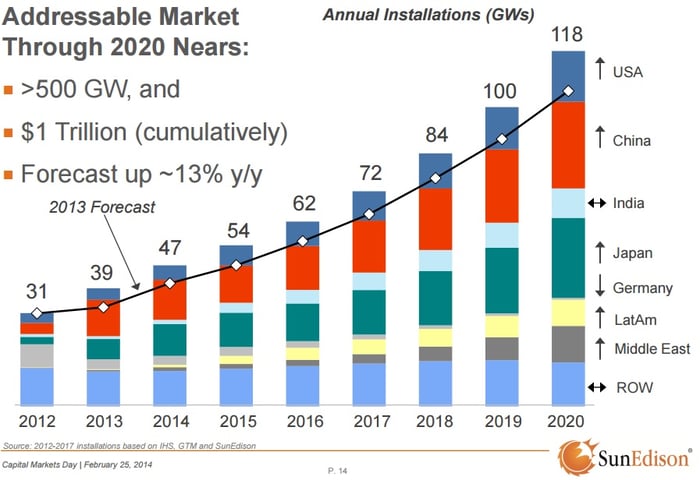 In fact, the market for global solar installations is expected to grow at a solid 16.9% CAGR over the next five years. This growth is likely to be fueled by two factors: the world’s ongoing concern over reducing carbon emissions, and a massive reduction in solar costs. The International Energy Agency predicts that over the next 10 years, the cost of solar will decline by 80%, or 14.9% annually.

Of course, that’s not to say there aren’t risks. For example, solar’s biggest competitor in the renewable energy market, wind power, is already cost-competitive with natural-gas-fired power plants while solar likely won’t be for several more years.

Then there’s the fact that trying to predict individual winners in any of these three sectors can be very difficult. Take the case of SunEdison, which is the world’s largest renewable energy developer and which many investors thought was a “sure thing” bet on solar. SunEdison’s shares are down 82% in the past year because the company went on a wild buying spree and is now being crushed under a $11.7 billion mountain of debt that threatens the very survival of the company.

Given the substantial risks involved with solar investing, I advise investors to be more conservative and consider the high-yield income solar yieldco 8point3 Energy Partners (NASDAQ:CAFD).

The reasons are simple and threefold. First, 8point3’s business model is extremely low-risk. The yieldco buys utility-scale solar projects from two of the largest, best managed, and most profitable integrated solar companies, First Solar and SunPower, and collects recurring and guaranteed cash flow from long-term, fixed-rate contracts from some of the largest and most stable utilities in the world.

Second, the current distribution yields 6.6%, a very generous and secure payout given the strong cash flows backing it.

Finally, the yieldco has superb growth potential. First Solar and SunPower have 13.7 GW of total solar projects in their development pipeline that will eventually be dropped down to 8point3, which should drive 12% to 15% distribution growth for many years to come.

Jason Hall
3D printing stocks have been ravaged in 2015: 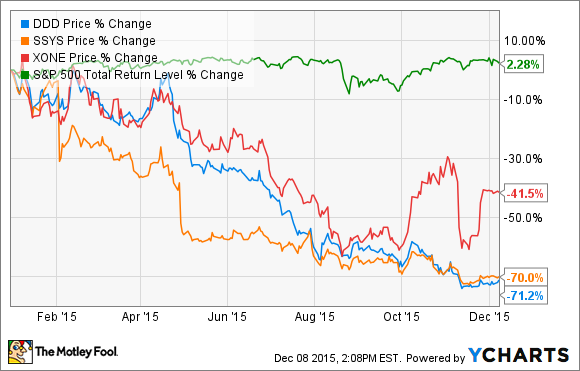 There's no denying that the industry is in a state of disarray right now. 3D Systems is looking for a new CEO after Avi Reichental abruptly resigned (or was pushed out) in October. Stratasys (NASDAQ:SSYS) has taken billions in writedowns related to its mergers with Objet and Makerbot in recent years. Advanced metals printer maker ExOne has missed management's sales guidance basically every quarter since going public. Every company in the industry is dealing with a big slowdown in spending on the technology, as companies reassess how 3D printing will play a role in their businesses.

But there's a difference between a cyclical slowdown -- as we appear to be dealing with now -- and an industry in trouble.

Despite the slowdown, projections for growth remain relatively strong. The industry is expected to do roughly $5.5 billion in revenues this year, with some projections for sales in 2020 to break $21 billion -- a breakneck 31% annual rate of growth.

Furthermore, the razor-and-blades nature of this industry makes it doubly attractive. While a high-end 3D printer gets sold once and is in operation for years before replacement, it needs a steady stream of supplies, which produces high-margin recurring revenues.

But where to invest? That's a hard question; I know from experience, having bought shares of ExOne, 3D Systems, and Stratasys this past February. Frankly, I think it's too early to make a call on where to invest.

But I think patient investors will have some great opportunities in 2016, as these downtrodden companies get their bearings and move forward. 3D Systems needs to identify a new CEO, and investors need to understand what his plan will be moving forward. Similarly, Stratasys needs to figure out its strategy as well, as both companies have struggled heavily because of aggressive merger and acquisition activity. That likely means cost-cutting and further rationalization of assets to focus on profitable growth going forward.

At the same time, the smaller players need to show that they can compete against larger competitors, and that their narrow focus on a specific market or materials such as metals will pay off. It's still too early to make a judgment call on that.

Bottom line? Rich and Adam point to more well-established and predictable sources of growth than 3D printing. However, when it comes to pure upside, the 3D printing industry -- with all of its pitfalls and risks -- still has massive potential.