It has been more than four months since Intel (NASDAQ:INTC) launched its enthusiast-grade Core i7 6700K and Core i5 6600K processors, and it's still extremely difficult to buy them as supply appears to continue to be anemic.

For example, if we look at NowInStock.net, we see that major online retailers occasionally get shipments of these processors, but that they quickly go out of stock:

Although it's actually encouraging to see that people are willing to pay above MSRP for these Intel processors (the 6700K MSRP is $350; 6600K is $243), it's frustrating to see that Intel is still unable to meet the demand for these chips even four months after launch.

What is driving this shortage? 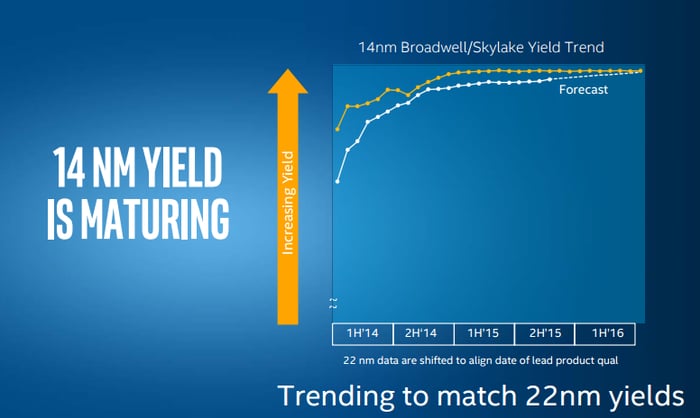 Although this graph is designed to give the appearance that 14-nanometer yields are close to 22-nanometer product yields, I believe that this chart doesn't tell the whole story.

I suspect that for most of Intel's 14-nanometer products -- particularly those aimed at thin and light notebooks -- yields are still lower than they are for the comparable 22-nanometer parts, but it's not bad enough such that major PC vendors can't, for the most part, meet demand.

Indeed, Newegg.com appears to have plenty of lower-grade quad core Skylake-based Core i5 desktop processors in stock as well as still lower-performance dual core Core i3, Pentium, and Celeron processors.

The supply issues appear to be with the very highest end chips running at relatively clock frequencies, which suggests that Intel is facing some not-so-pleasant issues in manufacturing chips that can meet the stringent power/performance requirements demanded by these processors.

Additionally, these chips are "multiplier unlocked" -- meaning that they can be easily pushed to higher-performance levels (outside of factory specification). I suspect that if these chips were shipped without a reasonable amount of additional performance headroom, buyers would be quite unhappy.

Did Intel focus too much on density/cost?
In a discussion with a source familiar with the matter, I was told that Intel's issues at the 14-nanometer node are largely due to the very aggressive metal pitch scaling (which translates into density scaling) that the company aimed for relative to the 22-nanometer node.

Indeed, Intel says that a "normal" scaling generation-to-generation of the minimum metal pitch of a process technology is usually by a factor of 0.7 times. With the 14-nanometer node, Intel chose to be more aggressive and aimed for a scaling factor of 0.65 times.

In the case where the yield problems impact not just whether chips are functional or not but the kinds of performance/power a chip can hit, we wind up with "shortages" of high-performance parts as we are seeing with the enthusiast class Skylake desktop processors.

Intel needs to get this sorted out soon
Intel's client computing group chief, Kirk Skaugen, was quite bullish on the market for gaming PCs during the company's most recent investor meeting, calling for 26% growth in the gaming PC market in 2016. Although Intel seems to be trying to satisfy unfulfilled Skylake demand by cutting prices on last-generation silicon, this is a stopgap solution.

There is a subset of the PC enthusiast community that simply will not buy processors based on what they know to be an older architecture. Many of these buyers also want the benefits that come with the newer motherboards/platforms (more robust connectivity, better upgrade path, and so on).

I don't think investors have much to worry about in the near term as the company's price cuts on older-generation chips should hold the line. However, if Intel doesn't substantially improve availability of its high-performance Skylake desktop chips over the next few months, Intel could wind up ultimately leaving money on the table.