Global economic and political headwinds have taken their toll on the stock market this year, creating tremendous levels of volatility seemingly across every sector. Fortunately, there are some stocks that our contributors think can provide investors with a smoother ride in this turbulent environment. Read on to see which stocks they think might be good buys right now.

Tim Green: With shares of Whole Foods Market (NASDAQ: WFM) down roughly 40% this year, driven by a series of disappointing earnings reports and a pricing scandal, the upscale grocer may not seem like a particularly safe pick. But I would argue that Whole Foods stock is the safest it's been in years, simply because investors are able to buy shares without having to pay an enormous premium. Whole Foods traded for nearly 50 times earnings back in 2012, but today, this ratio has fallen to about 20. 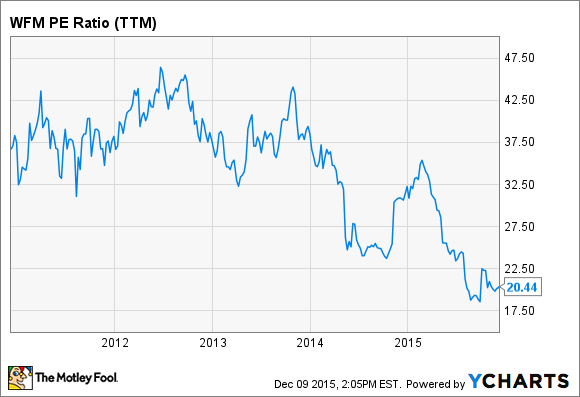 Whole Foods is certainly having its fair share of problems. Comparable-store sales growth has been slowing and even declined during the fourth quarter, in part because of a pricing scandal in New York City. The company announced in September that it's cutting 1.6% of its workforce, and its plans to open a more value-oriented chain, 365 by Whole Foods, has raised questions about the sustainability of Whole Foods' industry-leading margins.

It's possible that Whole Foods will see its margins contract going forward, but the company has the potential to triple its store count in the coming years. Currently, Whole Foods operates about 430 stores, and management sees the potential for 1,200 in the U.S. alone. While a P/E ratio of 20 may still seem expensive, the company generates a ton of cash. During fiscal 2015, excluding capital expenditures that went toward new stores, Whole Foods generated about $800 million of free cash flow. At the current price, investors are paying just 13.5 times this steady-state free cash flow, and while the company has some work to do revive comparable-store sales growth, I would argue that Whole Foods is a relatively safe bet.

Tyler Crowe: It's hard to say that any stock is considered "safe" in energy and materials today, but one stock investors might want to consider for safety in this space is Magellan Midstream Partners (NYSE:MMP). As a pipeline transport and logistics business, the company is pretty well isolated from the actual price of the commodity. Instead, the company collects fixed-rate fees for use of its transportation network that is guaranteed through long-term contracts.
Another aspect that further insulates Magellan from the swoon in energy is that a majority of its transportation network moves refined petroleum products such as gasoline and diesel. While crude oil production may decline in this energy slump, gasoline and diesel volumes have remained rather consistent throughout, thanks to the fact that petroleum product demand is pretty inelastic. Magellan's profits and cash flows are pretty fixed.
Magellan won't wow you with huge growth when the market turns, and I can't guarantee that Mr. Market will treat Magellan as if it's just another energy company and send shares down in this cyclical downturn. However, the business model is one that encourages consistent cash flows to pay a handsome distribution to investors, which is possibly the safest thing you could ask for in an energy stock today.

George Budwell: If you're looking for a safe haven in healthcare, I think Johnson & Johnson (NYSE:JNJ) has to be at the top of your list. Besides offering one of the sector's highest dividend payouts, with a yield of around 3%, J&J sports the most productive clinical pipeline for new drugs across the entire pharma industry over the past few years, and this trend looks as if it will continue, with several blockbuster candidates nearing pivotal data readouts.

Most impressively, the company has been able to achieve this noteworthy feat without resorting to extremely costly buyouts or mergers. A worrisome trend across pharma right now is the unsightly amount of debt many companies are taking on to chase top-line growth by acquiring smaller drugmakers. As a result, the industry's average debt-to-equity ratio has ballooned to 65%, according to S&P Capital IQ. J&J, by contrast, has backed out of deals when competitors have caused the purchase price to soar, giving the company a more comfortable debt-to-equity ratio of 27.8%.

With operating cash flows expected to exceed $18 billion next year and a solid balance sheet, J&J has the flexibility to pursue a number of avenues to create shareholder value moving forward. The same simply can't be said for many of its peers in the healthcare sector.