What: Shares of natural gas engine technology expert Westport Innovations (NASDAQ:WPRT) were up more than 10% near 3 p.m. EST on Dec. 15.

There are several major factors that have been at play, including an enormous drop in oil prices, which has made diesel and gasoline much cheaper. A lower per-gallon cost for natural gas has been noted as a key reason fleet operators would begin adopting natural gas-powered vehicles going forward, but so far that shift just hasn't happened en masse. The company's partnership with diesel engine maker Cummins, called Cummins Westport, has reported relatively decent unit sales growth of around 7% so far this year, but for greater context, the partnership's total engine sales this year will be equal to less than 3% of total medium- and heavy-duty vehicles sold in 2015. That's far from a fast pace of adoption.

Furthermore, the company's Chinese joint venture has seen unit sales absolutely plummet this year as economic growth slows in that country. In other words, the company has a lot on its hands right now, and not enough forward progress.

Another couple of potential factors behind today stock price jump? End-of-year tax loss selling may be finally slowing, and it's possible that investors seeing value at these prices may jump in. I'd caution against that approach, simply because Westport's cash-burning operations could quickly eat up any asset value before shareholders see a return. The asset value just isn't a good backstop for the company because of that.

Second, the stock has simply fallen so far, that the market cap has reached a point where it doesn't take very much money to move the stock. Factor in that it's still a well-known name, and more days like this (up and down, too, unfortunately) are more likely than not.

Now what: It's not all bad news, as Westport has been able to cut costs and take steps to better-position the business. Factor in the upcoming merger with Fuel Systems Solutions, which will improve the combined company's balance sheet, and pair a more operationally sound business with Westport's so-far struggling effort to build a business: 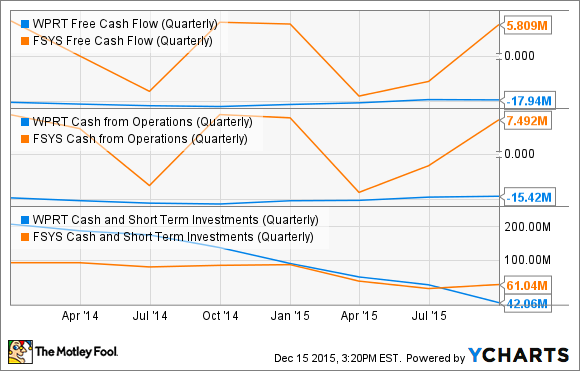 There remains very real short- and long-term risk, no matter what Westport's stock price does in the short-term, so long as the company keeps burning through its assets faster than it can grow cash flows.

Without any material change in the business, the risk remains high, and there wasn't any new information today. When there's nothing to act on, it's usually best to do nothing.