The stock is still holding on to a double-digit gain for the year, which puts it in much better position than fellow ultralow-cost carrier Spirit Airlines (NYSE:SAVE), which has lost nearly half of its value in the past year. That said, Allegiant stock is down more than 25% since hitting an all-time high in August. 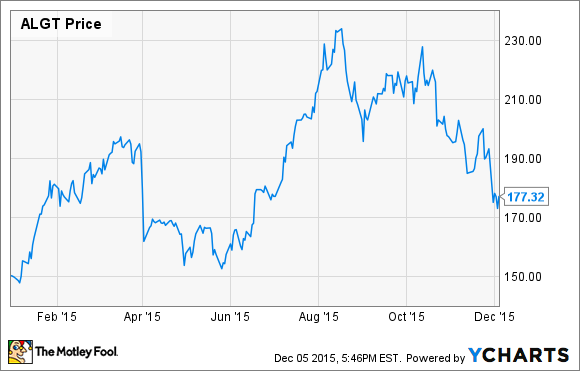 So what: Digging more carefully into Allegiant's stock performance, it turns out that almost all of its losses in November came on the last day of the month when the stock fell more than 9%.

That sharp drop was primarily caused by an analyst downgrade from Raymond James. The analyst team there expects oil prices to increase significantly in the second half of 2016 so that Brent crude will average $60/barrel next year.

That fuel price estimate is far above the current futures curve, which implies that oil prices will average less than $43/barrel. Given that OPEC once again failed to rein in oil production at its latest meeting, the Raymond James oil forecast seems quite aggressive. Holding all else equal, a $17/barrel difference in the forecasted crude price would have a more than $2 impact on Allegiant's earnings per share.

Now what: Allegiant stock has typically carried a premium valuation, but by the end of November, it traded for just 14 times projected 2015 earnings.

Assuming that oil prices don't suddenly spike in 2016, Allegiant should be able to grow its earnings again next year. Meanwhile, the company is rapidly shifting most of its flying away from fuel-guzzling MD-80s to more fuel-efficient Airbus planes, which will lessen the impact of any future rise in oil prices.

On the other hand, Spirit Airlines stock is even cheaper, at less than 11 times projected 2015 earnings. Additionally, Allegiant has very poor labor relations, which could prove a liability in the long run. Unless Allegiant stock falls further, Spirit Airlines may be the better buy.