The sandwich brand reported strong earnings on Nov. 3, but did not see a major gain in share price until Nov. 16, when it began a mostly steady climb, finishing the month at $12.47. That gave it an 11.3% gain for November, according to S&P Capital IQ data. 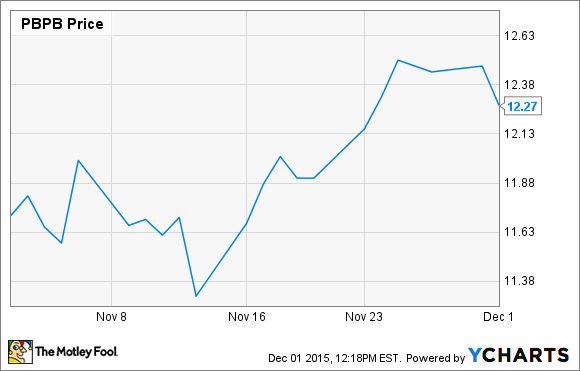 What: It would have been logical if Potbelly stock had started to climb on Nov. 3 after the company reported a total revenue increase of 13.4%, to $96 million, and that company-operated comparable-store sales rose 3.7% in its third quarter. That, however, did not happen and the stock went into a mild decline after an initial bump from the earnings report.

Its gains closely mirror the pattern of two other fast-casual players, Panera Bread and Jack in the Box, which owns the growing Qdoba brand. Both of those chains saw big stock gains around the same period that Potbelly rose. The reason may be the same one that caused Chipotle stock to decline during roughly the same time frame -- the E. coli outbreak impacting Chipotle that began in early November and grew as the month wore on.

So what: If diners avoid Chipotle, they will probably spend their eating-out dollars elsewhere. Potbelly, Panera, and Qdoba are all likely to be beneficiaries.

"Chipotle's pain will be Panera's gain," wrote Stephen Anderson of Maxim Group, in a report cited by CNN Money.

The analyst noted that it won't just be Panera that benefits but other fast-casual concepts will profit from the problems facing what has been the standard bearer for the category. He did not mention Potbelly specifically, but it makes sense that the brand that pushes higher-quality sandwiches would be one of the recipients.

Now what: While many analysts predict that Chipotle will have a rough quarter or two, history suggests that consumers forget about things like E. coli scares relatively quickly. That's ultimately good news for shareholders of the Mexican eatery, but it's a bit of a warning for shareholders in companies experiencing a bump from CMG's woes.

That said, Potbelly has been a growth story, and while it may not sustain all of these gains, its story will ultimately be told by whether it can continue to deliver. The biggest benefit of this short-term bump may be that some customers skip Chipotle and give the sandwich-maker a try. That could help it land more customers and continue to post impressive results.