Even if sales in the auto industry peak, there will still be hidden gems in the industry for investors to consider.

"Let the good times roll," is what most people in the automotive industry are thinking currently. Times are good indeed, with automotive manufacturers posting healthy profits and vehicle sales continuing to move higher. In fact, through November, the seasonally adjusted annual rate of vehicle sales in the U.S. checked in with its third consecutive month of SAAR topping 18 million. 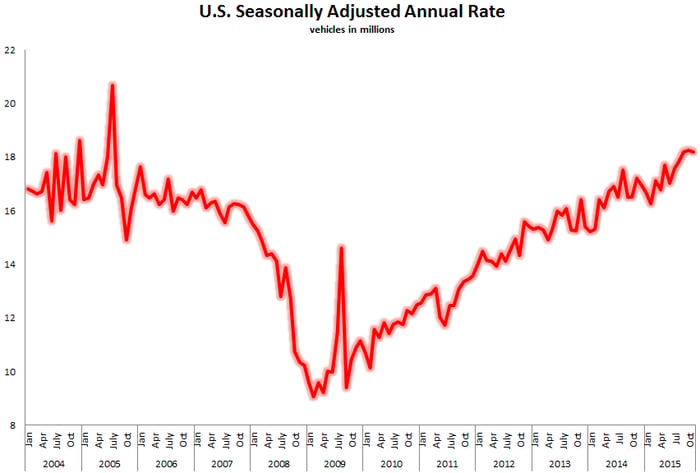 However, the market will eventually work its way through pent-up demand from the past recession, when sales of vehicles plummeted. While sales will likely remain elevated for the near term, here are two investments to consider if you believe sales are going to move lower sooner rather than later.

1. BorgWarner (BWA -0.96%)
Sure, the automotive industry is cyclical, and that equals pain for auto manufacturers like Ford in the event sales take a downturn. However, that doesn't mean all investments in the auto industry are to be avoided, even now when sales could be peaking. BorgWarner is a great example, as the company is poised to benefit from industry trends that will stick around through up and down cycles. 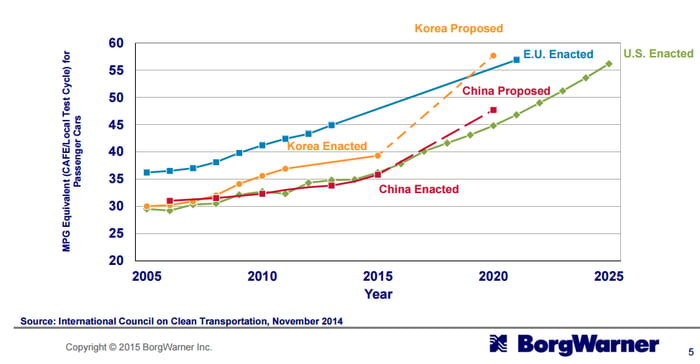 Currently, BorgWarner's revenue for the fiscal year will likely check in a little lower than $8 billion, but management expects that figure to jump to roughly $15 billion by the end of 2020. If BorgWarner can reach operating income margins, excluding special items, of 13% this year as originally forecast, it will be the sixth straight year of year-over-year improvement and closer to its goal of mid-teens by the end of 2020.

While BorgWarner still operates in a fairly capital-intensive business, its return on invested capital has checked in around 20% annually since 2011 -- which suggests the company is investing in its business wisely.

BorgWarner is far from (small-f) foolproof, as is any investment in the stock market, but if you're concerned about owning auto manufacturers in the event sales decline in the U.S. and/or worldwide, BorgWarner is one company still poised to benefit from an increased focus on improving fuel economy and reducing vehicle emissions.

2. O'Reilly Automotive (ORLY 0.67%)
During the past recession, automotive aftermarket chains like O'Reilly Automotive actually fared well as many consumers put off buying new vehicles and instead did maintenance and repairs on their vehicles themselves. That meant consumers spent a lot of time perusing the aisles of O'Reilly or one of its competitors.

O'Reilly operates a dual-market strategy, which means it generates roughly half of its revenue from the do-it-yourself market and half of its revenue from the commercial side, or the "do-it-for-me" market. At the end of 2014, its official split was 58% do-it-yourself and 42% do-it-for-me. O'Reilly was an early adopter of this strategy, which its competition is copying.

It's a bonus that O'Reilly performed well during the last economic downturn, but the company appears to have upside regardless of the economy. During O'Reilly's analyst day presentation in August, it noted that year-to-date comparable-store sales were up 7.2%, compared to a 5.7% increase for the same period in 2014. During the same time frame, its operating margin increased to 18.7% versus 17.4% for the prior year.

Much of that improvement is due to the rising number of miles driven in the U.S., which fuels demand for auto repairs and maintenance parts. Even with economic woes and unemployment pressures over the past seven years, total miles driven remained relatively flat -- and as the U.S. economy continues to add jobs and gas prices remain low, miles driven is starting to resume growth.

Also, investors should keep in mind that growth can come in the form of increased operational efficiency. O'Reilly acquired CSK Auto in 2008, which added roughly 1,300 stores to its footprint, and the company has done a solid job of improving the practices and strategies to sell products in those acquired stores. However, the company has said that there is still room to continue optimizing these stores' performance, which should continue to drive overall same-store sales and margins higher.

Ultimately, as great as it is for auto manufacturers right now, when new-vehicle sales are set to test the annual record of 17.4 million set in 2000, there will be plenty of opportunities for investors if those sales begin to decline over the next five to 10 years. BorgWarner and O'Reilly are certainly two options to keep on your watchlist.

Daniel Miller has no position in any stocks mentioned. The Motley Fool owns shares of O'Reilly Automotive. The Motley Fool recommends BorgWarner. Try any of our Foolish newsletter services free for 30 days. We Fools may not all hold the same opinions, but we all believe that considering a diverse range of insights makes us better investors. The Motley Fool has a disclosure policy.