The media conglomerate got swept off in an industrywide selloff. Here's what you need to know:

What: Shares of media titan Time Warner Inc. (TWX) sold off 24% according to S&P Capital IQ, following a broad backlash against the traditional media sector. As the chart below shows, the decline came in the latter half of the year as a number of reports from media conglomerates indicated that the cord-cutting phenomenon may be taking place sooner than expected. 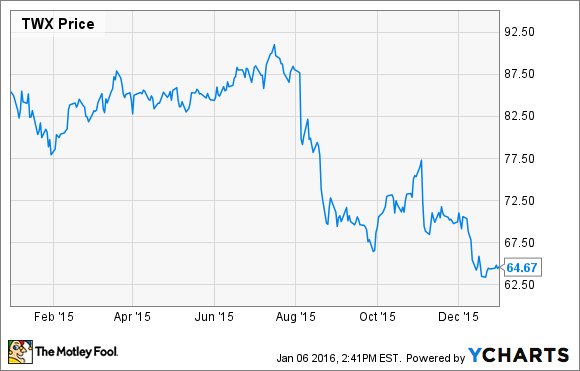 So what: The first week of August brought a bloodbath for media stocks, and Time Warner, the parent of such global enterprises as Warner Bros. studios, HBO, and the Turner family of networks, was no different. Nearly all the major cable programmers including Walt Disney CO, 21st Century Fox, and Viacom tumbled as Disney, even with ESPN, the crown jewel of the cable industry, was losing subscribers.

The irony for Time Warner is that it actually sped past earnings estimates in that quarter. In the period, the conglomerate saw revenue increase 8% to $7.4 billion, while earnings per share jumped 14% to $1.25. However, investors were rattled by the underlying strength of the business on concerns about cord-cutting as the Turner Networks, which include TBS and TNT among others, are the biggest segment of the company's business. Time Warner also left its full-year guidance untouched in the report, indicating a conservative view for the future. The stock slipped again later in the month on a downgrade due to cord-cutting, and the stock fell again in early November on a weak forecast, projecting lower-than-expected earnings last year.

Now what: In a year where new media stocks like Netflix and Amazon.com more than doubled, leading the S&P 500 along the way, 2015 was a clear victory for the cord-cutting side of the market. Time Warner has its own dog in that fight now with HBO, which last year launched a streaming-only service, HBO Now. HBO has been the leader in premium programming for several years, and that service should help stem any other losses from cord-cutting. The market is still expecting solid EPS growth next year of 13%, indicating that the company is stronger than last year's performance might indicate. With a forward P/E of just 13, Time Warner shares could bounce back if the company can deliver on that forecast.