Wall Street downgrades helped push these two stocks down even as indexes eked out their second daily gain of 2016.

Stocks spent much of the session in negative territory but pulled off a late-session spike to end the day on a positive note. The Dow Jones Industrial Average (DJINDICES: ^DJI) gained 58 points, or 0.4%, and the S&P 500 (SNPINDEX: ^GSPC) rose by a scant 2 points, or 0.1%. 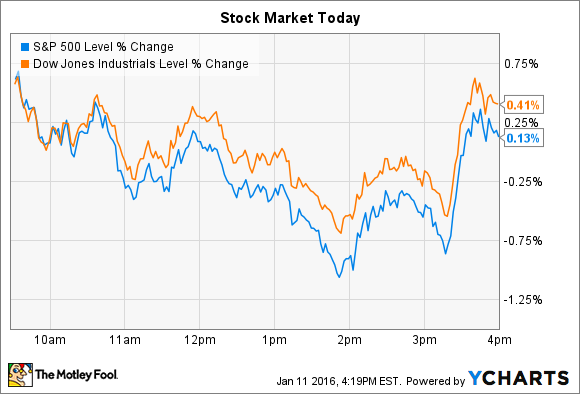 As for individual stocks, sports apparel giant Under Armour (UAA -4.65%) fell on worries that its stellar growth streak could soon be coming to an end. And fitness tech company Fitbit (FIT) dove to its lowest point since its June IPO after another stinging downgrade from a Wall Street analyst.

Under Armour's downgrade
Under Armour's stock fell as much as 11% before closing the day down 7%. Shares were hit with an attention-grabbing downgrade from Morgan Stanley (MS 0.38%) analyst Jay Sole, who lowered his rating to "sell" while slicing his 12-month target down from $103 per share to $62 per share per share. The analyst argued that two negative trends will combine to produce a poor year for the stock.

Under Armour's falling footwear margins were one reason why the stock was downgraded today. Image source: Under Armour.

First, the clothing retailer is likely losing market share in the category of women's apparel, he said. And second, it appears to be changing its posture in its footwear offerings to compete more on the basis of price. Rising competition in apparel would pose a risk to Under Armour's stellar sales growth streak (it recently posted its 24th straight quarter of 20% or better growth), while price competition on shoes "threatens to erode UA's premium brand image," Sole said .

As for footwear pricing, investors shouldn't panic about slipping margins. After all, management stated in their October conference call that they were planning fourth-quarter promotions to clear out excess product, "as part of our normal inventory management process." Rising competition in women's apparel would be a bigger concern, though, as it is one the five key sources of long-term growth that CEO Kevin Plank and his executive team have targeted (along with men's apparel, international sales, e-commerce, and footwear).

Fitbit's massive sell-off
Fitbit shares fell sharply today on heavy trading volume, dropping 13%. The fitness tech maker's stock is now down an incredible 40% in just the last six trading days. Most of that drop centered around investors' negative reception of its newly unveiled Blaze smartwatch. By adding a high-margin offering to its fitness lineup, the product could help boost profitability for the company, but it may match up poorly against competing smartwatches with more built out functionality. Others worry the Blaze might cannibalize Fitbit's other smartwatch offering, the Surge.

R.W. Baird analyst William Power joined in on the negativity today by slashing his price target on the stock from $54 per share to $30 per share. He cited similar concerns, competitive pressures and product strategy, that have powered the stock's epic slide to start 2016.

Fitbit is a leader in the wearables space, which one of the fastest-growing categories of consumer technology. That great position is a key reason why it last posted a whopping 168% quarterly sales increase on shipments of just under 5 million health and fitness devices. But as Fitbit seeks to expand its addressable market, the company will have to show that its design, pricing, and marketing, can rival the execution of well-established tech titans.

Demitrios Kalogeropoulos has no position in any stocks mentioned. The Motley Fool owns shares of and recommends Under Armour. Try any of our Foolish newsletter services free for 30 days. We Fools may not all hold the same opinions, but we all believe that considering a diverse range of insights makes us better investors. The Motley Fool has a disclosure policy.