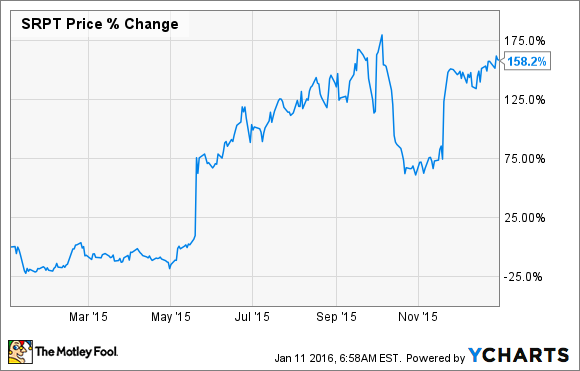 What: Sarepta Therapeutics (NASDAQ:SRPT) turned out to be one of the best performing biotech stocks last year after the U.S. Food and Drug Administration, or FDA, granted the company's request to review its experimental Duchenne muscular dystrophy, or DMD, drug eteplirsen. Specifically, the company's shares gained more than 158% in 2015, according to data provided by S&P Capital IQ.

So what: The FDA originally appeared to be dead set against reviewing Sarepta's flagship experimental product candidate prior to the drug completing a late-stage study. So, the FDA's sudden change of heart was definitely welcome news for investors and patients.

Before then, however, the FDA should hand down its decision regarding BioMarin's (NASDAQ:BMRN) competing DMD therapy drisapersen. This decision will likely have a major impact on Sarepta's share price either way, given that the two drugs are targeting the same set of DMD patients.

On the bright side (for Sarepta shareholders at least), BioMarin's drug failed to impress reviewers at its advisory committee meeting last November, implying that there's a good chance the drug will be rejected.

With that being said, eteplirsen's current regulatory application has its own set of problems that may prove to be too much to overcome during this review cycle. As such, I won't be picking up any shares in this speculative biotech until this huge risk factor is off the table.